Pride at play in second tilt between Isles, Blue Jackets 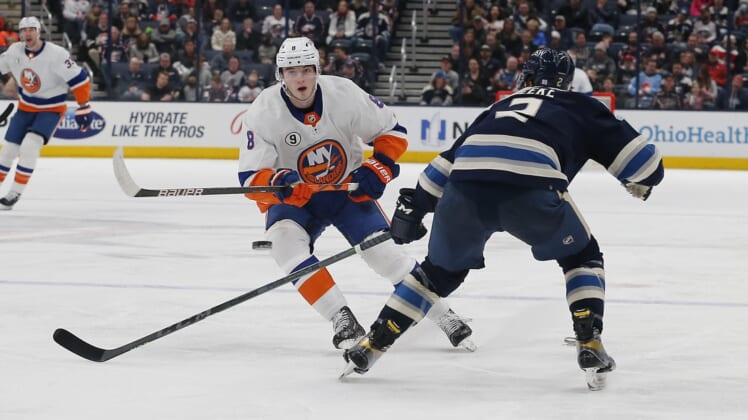 Vying to become the best non-playoff team in the Eastern Conference wasn’t the goal for the New York Islanders entering this season.

But a win Thursday night against the Columbus Blue Jackets in the back end of a home-and-home series would provide the Islanders another bit of evidence they can become a serious playoff contender again next season.

The Islanders host the Blue Jackets in Elmont, N.Y.

Both teams were off Wednesday after the Islanders held on for a 4-3 win Tuesday. New York scored four goals in a span of 17-plus minutes bridging the first and second periods before holding off a comeback attempt by the Blue Jackets.

The win snapped a two-game losing streak for the Islanders, who have gone 9-6-1 this month to move within two points of the Blue Jackets in the conference standings. With a regulation win Thursday, New York would technically occupy ninth place because it has two games in hand on Columbus.

The Islanders, who reached the NHL semifinals each of the previous two years, aren’t going to hang a banner at UBS Arena for such an achievement.

But moving past the Blue Jackets would be an indication this challenging season for New York — which enters Thursday 17 points behind the Washington Capitals for the final wild-card spot in the East — has been more about unprecedented challenges than a tangible decline.

The Islanders fell into last place in the Metropolitan Division during an 11-game losing streak (0-8-3) from Nov. 7 through Dec. 5 in which the team battled a COVID-19 outbreak.

“I think it just comes down to being professionals and having pride,” said Islanders center Mathew Barzal, who had two assists Tuesday night. “Fans pay money to come watch us play. We’re all getting paid. This is our job. We’re going to come out here, no matter what the circumstance, and work hard.”

Circumstances have grown tougher this month for the Blue Jackets, who entered March as the Capitals’ lone competition for the last wild card spot. But they have lost nine of 13 (4-5-4) since March 4, including their last four (0-2-2).

Captain Boone Jenner (lower-back injury) missed his eighth straight game Tuesday for the Blue Jackets, who were also without defenseman Zach Werenski after the latter suffered an upper-body injury against the Minnesota Wild in Saturday night’s overtime loss.

Backup goalie Joonas Korpisalo is out for the season due to a hip injury that will require surgery.

Columbus also played Tuesday without head coach Brad Larsen and assistant coach Steve McCarthy, each of whom entered COVID-19 protocol. Pascal Vincent served as acting head coach and took some solace in the effort produced by the Blue Jackets, who outshot the Islanders 45-29.

“Down 4-1 against the New York Islanders and the way they’ve been playing the last 20 games — it’s quite a comeback,” Vincent said. “I thought we were coming back in the third period. Seventy (shots in the game), Forty-five shots on net. Usually, you win those games.”