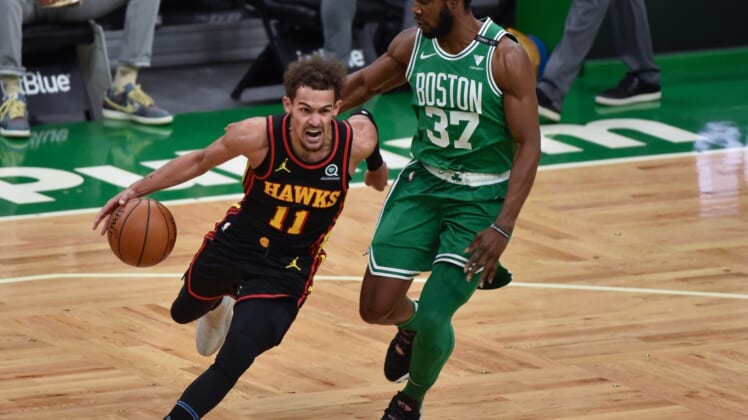 The visiting Atlanta Hawks will get a chance to test their newfound fourth-quarter resolve on Friday when they play their second straight game against the Boston Celtics.

The Hawks again will have assistant coach Nate McMillan running the team on Friday. He is filling in for head coach Lloyd Pierce, who returned to Atlanta for the birth of his second child.

The victory reversed a trend of fourth-quarter struggles for the Hawks. It was the 17th time they had taken a lead into the fourth quarter, but only the 10th time they’ve managed to close it for a victory.

“It was something we were all echoing in the huddle late in the game,” Trae Young said. “We wanted to get stops and then also close out the game. We’ve been in a couple games recently where we’ve had leads and given it up late in the game.”

Much of Atlanta’s fourth-quarter success on Wednesday can be attributed to Young. He scored 16 of his 40 points in the fourth quarter and helped rebuff Boston’s comeback hopes with a key basket or assist. He scored eight points after the Celtics cut the lead to six with 2:38 remaining.

It was the third time in his career that Young has scored 40-plus points with 20 or fewer field-goal attempts; he was 14 of 20 shooting. The only other players in franchise history to accomplish the feat were John Drew, Zelmo Beaty, Richie Guerin and Bob Pettit, all before the 3-point shot became part of the game.

“We want to establish tempo, and it really starts with Trae and with our defense, getting stops and rebounding the ball,” McMillan said. “We want Trae to keep pressure on that defense, pushing the ball, looking to attack. If he doesn’t have anything, get us organized and get us into a set.”

The past few weeks have not been easy for the Celtics, either. Boston has lost five of its last seven games and seen its record slip to .500. Jayson Tatum, who scored 35 points against the Hawks, acknowledged the struggles but isn’t ready to quit.

Boston has been particularly vulnerable in transition defense, although the Celtics allowed only 10 fast-break points against the Hawks.

“I think it’s an area that has to improve if you’re going to have any chance of being a good team,” Boston coach Brad Stevens said. “Those baskets kill you, so we have to do a better job of that.”

The Celtics should get Kemba Walker back for the rematch. The veteran was withheld for load management on Wednesday. He has averaged 17.8 points and six assists in 32 career games against Atlanta.