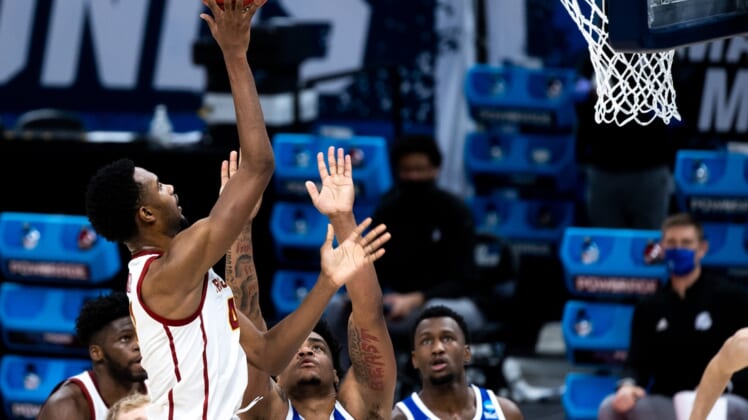 USC forward Evan Mobley (4) attempts to shoot a layup during their game against Drake in the first round of the 2021 NCAA Tournament on Saturday, March 20, 2021, at Bankers Life Fieldhouse in Indianapolis, Ind. Mandatory Credit: Albert Cesare/IndyStar via USA TODAY Sports

Coming back off COVID-19 protocol, expectations seemed rather minimal for Kansas inside threat David McCormack to begin play in the NCAA Tournament.

Sure enough, McCormack did not start in the 93-84 first-round win over Eastern Washington and scored just two first-half points. Kansas head coach Bill Self said his first impressions of McCormack were that he might only be able to contribute fouls.

“After the way he started the game, didn’t think he was going to give us much offensively, or defensively — just give us five fouls,” Self said.

Oddsmakers opened with Kansas as a 1.5-point underdog to the Trojans.

Evan Mobley, the Pac-12 player of the year, recorded his 11th double-double with 17 points and 11 rebounds as USC bounced Drake, 72-56, in the first round. The presumptive NBA lottery pick also blocked three shots. Isaiah Mobley, Evan’s brother, added 15 points on 6-for-7 shooting for the sixth-seeded Trojans.

Although Marcus Garrett added 20 points and eight rebounds against pesky Eastern Washington, he couldn’t help but rave about McCormack.

“That was definitely incredible,” Garrett said. “Knowing that he hasn’t practiced or done anything in the last 10, 11 days, for him to come out and just be so productive on the offensive, that was great to see.

Southern Cal entered the tournament with only one player — Chevez Goodwin — with any tournament experience. While Kansas settled in after a sluggish start, the Trojans needed a bit more time to get comfortable.

McCormack’s ineffectiveness playing 11 first-half minutes prompted Self and his staff to consider a shift to small ball.

The Jayhawks eventually allowed 58 points collectively to Tanner Groves and his brother, Jacob, as the Eastern Washington stretch forwards required McCormack to respond for Kansas to win its 14th consecutive first-round game.

“At halftime we were thinking of maybe going small,” Self said, “but our assistants were like, ‘No, no, let’s play our best players.'”

McCormack was able to log 25 minutes. He finished 9-for-14 shooting from the field.

The Jayhawks grabbed the lead inside the final nine minutes after trailing by 10 early in the second half.

“It was a hard game,” Self said. “It’s great to win in the tournament, it’s great to advance, but we got outplayed for the majority of the game.”

Even with McCormack’s much-needed contribution, the Jayhawks still played short-handed. Jalen Wilson, a starter who has six double-doubles in his last 10 games, also tested positive but could return from COVID-19 protocol to play Monday. Backup Tristan Enaruna also was in protocol Saturday.

USC, the Pac-12 runner-up, will bid to advance past the Round of 32 for the first time since 2007. The Trojans won 13 of 14 on a stretch that lasted until mid-February.

“Drake is an excellent team, and they especially came out in the first half hot,” said Isaiah Mobley, “but we finished, we finished strong and I’m proud of everybody. On to the next.”

USC held Drake to just 19 percent shooting in the second half and better contained the Bulldogs’ Joseph Yesufu.

“We really locked in on him,” Evan Mobley said.