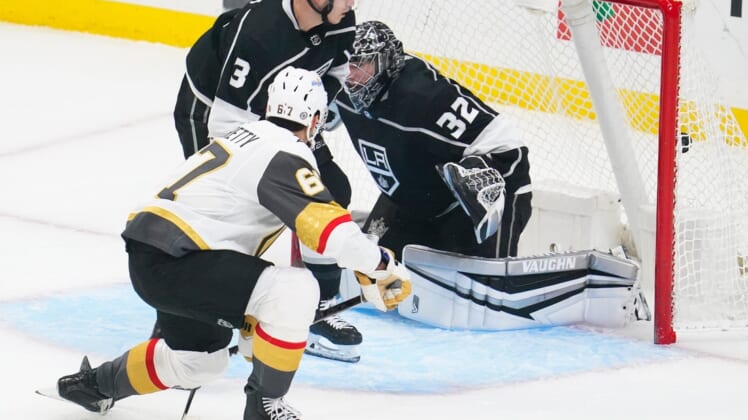 The West Division-leading Vegas Golden Knights can match their longest winning streak of the season when they play the Kings in Los Angeles on Sunday afternoon.

Vegas won its fifth straight in Friday night’s opener of a back-to-back at the Staples Center, 4-2. The Golden Knights, who will also be trying to complete their eighth sweep of a back-to-back, won six games in a row from Feb. 22 to March 6 before getting swept in two games by the Minnesota Wild in Saint Paul, Minn.

It was after the two losses against the Wild that Vegas began its current streak with a sweep of two games at St. Louis followed by a pair of wins over visiting San Jose.

Max Pacioretty scored two goals and Robin Lehner, playing in a game for the first time since Feb. 7 after suffering the third concussion of his career in a Feb. 11 morning skate, made 23 saves to lead the Golden Knights in Friday night’s victory, its third in three games with Los Angeles this season.

“I thought everybody on our team played a strong game tonight, Robin obviously included,” Pacioretty said after his fourth two-goal game of the season and 52nd of his career. “It’s not easy to come back after such a long time off. He kind of picked up and fit in right away which was nice to see.”

Marc-Andre Fleury had started 17 of the previous 18 games while Lehner was out.

“We have a one-two punch that’s very dangerous, and hopefully as the season goes on, we’re able to use that to our advantage,” Pacioretty said.

William Karlsson, who began the day on COVID-19 protocol but was cleared a couple hours before the game, scored what proved to be the game-winner late in the second period on a deflection of a Jonathan Marchessault shot. William Carrier then added a key insurance goal midway through the third period, his first since Feb. 22, 2020, when he deflected a Nic Hague shot past Jonathan Quick.

Vegas finished the first half of the 56-game season with 21 wins, 43 points and a five-point lead in the West before it was trimmed to three after Colorado defeated Minnesota on Saturday.

“We’re overall pretty happy with how the first half has gone,” said defenseman Alec Martinez who had two assists in his first game back at Staples Center since being traded to the Golden Knights by the Kings last season. “Our trajectory is going in the right direction.”

The Kings rallied from an early 2-0 deficit to tie it on goals by Alex Iafallo and Trevor Moore. Quick, back after missing five games with a lower-body injury, made 29 saves.

“Like usual, we take a punch or two to the face and then we get ourselves off the mat and we continue to battle,” said Kings coach Todd McLellan. “That’s in our game, that’s in our DNA, but that’s a moral victory.

“I think we’re a better team than we played tonight. I think we showed them a little too much respect and disrespected what we’re capable of doing. There’s things that we have to improve on. We’ll work on it (Saturday) and hopefully we’ll have a better (game) on Sunday.”