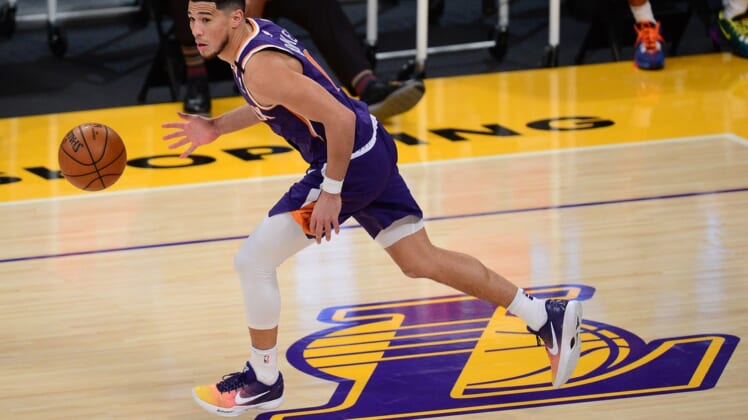 The Phoenix Suns will be seeking to cement the title as the biggest surprise of the NBA’s first half when they host the Golden State Warriors on Thursday night.

One year after going into the All-Star break with a 22-33 record, the 12th-best in the Western Conference, the Suns have a chance to reside atop the Pacific Division with another win to tack onto their 23-11 mark this season.

The Suns enter the final day of the first half with the second-best record in the NBA, trailing only Utah (27-9).

Phoenix moved ahead of the Los Angeles Lakers atop the Pacific with a 114-104 road win on Tuesday night that had NBA observers abuzz during and well after the relatively comfortable win.

The game became talk-show fodder nationwide on Wednesday in the aftermath of Suns star Devin Booker having been ejected midway through the third period after receiving bang-bang technical fouls.

Referee crew chief Marc Davis announced afterward that Booker received his first “T” for excessive complaining, then got his second for profanity.

The Suns hardly missed their leading scorer over the final 19 minutes. Dario Saric filled the void with 21 points off the bench, giving Phoenix five players — including Booker with 17 — with 15 or more points.

Golden State began that game with two more wins than Phoenix, and now has four fewer after a near-miss in a 108-106 loss at Portland on the front end of a back-to-back on Wednesday night.

It appeared the Warriors had tied the game with 4.1 seconds to play on a Draymond Green layup, and a whistle briefly gave the Warriors the impression that they had a chance at a three-point play and the lead.

But instead, Green was called for charging into Damian Lillard, negating the hoop and sending the Warriors to a second straight defeat.

The Warriors nearly won despite sitting out Kelly Oubre Jr., who suffered a sprained left wrist on a hard fall following a dunk attempt in practice on Tuesday.

Golden State coach Steve Kerr labeled Oubre’s availability for the Phoenix game as “we’ll see” as his club attempts to avoid its first three-game losing streak of the season.

“Just keep going. Long season,” he said of his message to the team as it prepared for a flight to Phoenix. “All we can do is keep forging ahead, and that’s the plan.”

No doubt, Oubre would love to face his former team, especially after shooting 1-for-11 and scoring just four points in the earlier homecoming in January.

He averaged 17.9 points in two seasons for the Suns before getting shipped to Oklahoma City in November as part of the package that delivered Chris Paul to Phoenix. A few days later, he was traded to the Warriors.

Oubre is averaging 15.5 points in 35 games for Golden State.