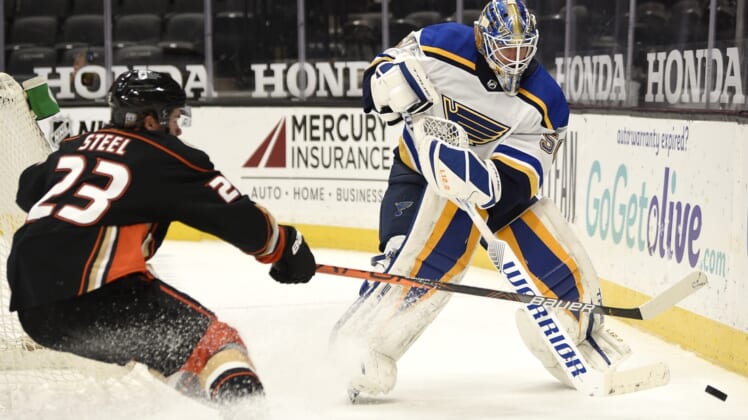 The St. Louis Blues hope to ride the momentum of recent road success when they host the Arizona Coyotes Tuesday.

The Blues defeated the Vegas Golden Knights once and the Anaheim Ducks twice last week before returning home to Enterprise Center.

The Coyotes have lost four of their last six games, but they are coming off of a 3-2 victory over the Ducks at home on Thursday.

This game will be the start of a three-city, six-game road trip.

“You look at the schedule, you’re playing St. Louis, Minny and Colorado,” Coyotes coach Rick Tocchet said. “But we’re just looking at Tuesday night. That’s the way I look at it.”

The Coyotes will face a hot goaltender in Jordan Binnington, who is 3-0-1 in his last four starts with a .939 save percentage.

Kyrou has five goals and five assists in nine games after scoring just nine points in 28 games as a rookie last season.

“Jordan Kyrou and Jaden Schwartz are a huge complement to my game,” Schenn said. “Those guys are really fun to play with. They have tons of speed. They work extremely hard. That’s why we have success.”

The Blues could get rugged defenseman Robert Bortuzzo back (upper-body injury) back for this two-game set. Forward Tyler Bozak (upper body) remains questionable.

The Coyotes have benefited from good offensive starts from forward Conor Garland and Christian Dvorak, who each have three goals and four assists. Nick Schmaltz has three goals and three assists.

Defenseman Jakob Chychrun (one goal, five assists) has stepped up his play with defenseman Oliver Ekman-Larsson (lower-body injury) on the shelf.

Goaltender Darcy Kuemper (2.44 goals-against average, .910 save percentage) has allowed six goals in his last four starts. Antti Raanta, who won his only start this season, has come off injured reserve — so he should see action at some point during this trip.

The Coyotes must face the top three teams in the West Division standings during this 11-day road swing.

“It’s going to be a bunch of hard games,” Garland said. “It starts with St. Louis, obviously, they’re a great team, a hard team to play against. A lot of people think they’re Cup favorites, which they are. We’ve got to go into their building and play them well. Not to look too far ahead, but you understand it’s a condensed schedule.”