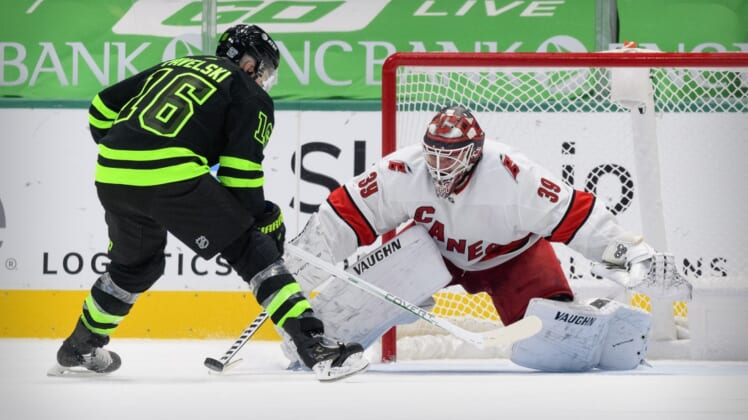 Perhaps it was the short offseason after reaching the Stanley Cup Final last year. Or the coronavirus outbreak that forced their season to start more than a week late.

But something just isn’t right with the defending Western Conference champion Dallas Stars.

The Stars, who host the Nashville Predators on Monday night, are winless in their past five games (0-3-2) after Saturday’s 4-3 shootout loss to visiting Carolina. The Stars have won just once in eight games since sweeping a four-game homestand to start the season.

“Obviously, we’re desperate for a win here, and we know that going into the game,” Stars forward Blake Comeau said. “There are going to be times throughout the season where you play well enough to win but you don’t get the win. We know it’s a results-based league and we have to start producing some wins. We did a lot of good things last game. There are a couple of other things that we need to clean up, but I thought we played hard, so we’re not getting too far down on ourselves around here.”

The Stars salvaged a point as Joe Pavelski scored on the man advantage with 40 seconds remaining in regulation to tie the score 3-3. It was Pavelski’s NHL-leading seventh power-play goal of the season, one more than he had in 67 games last year.

Jason Dickinson and Jason Robertson also scored for the Stars and Jake Oettinger made 18 saves.

“Did we play well enough to win that game? Yeah. Are we throwing points away? Yeah, we are,” Dallas coach Rick Bowness said. “We’re outplaying teams and giving away points, so that has to correct itself here. We’re going to need more from everyone to make that balance swing in our favor.”

The Predators felt much the same way after suffering a 4-2 home loss Saturday to lowly Detroit. Nashville has won just once in its past five games.

“We were not really dialed in,” said Filip Forsberg, who scored along with Rocco Grimaldi. “Detroit came ready to play. They played a lot more physical than (Thursday) we didn’t match that at all until the third where we got going. It’s obviously not good enough.”

Nashville trailed 3-0 before scoring twice in the third period.

“I don’t know what’s behind (the slow starts), but that’s something, without a doubt, we need to clean up in our game,” Predators defenseman Ryan Ellis said. “It’s like we don’t want to play until we’re down and we’re chasing, and then you see some good hockey, but it’s unacceptable. There’s no excuse for that.”

After going 1-3 on their four-game homestand and being outscored 17-6, the Predators now hit the road for six straight with two-game series in Dallas, Columbus and Detroit.

“It’s like we want to see how the game is going to be played instead of understanding what it takes to win every night,” Predators coach John Hynes said. “We kind of take the temperature of the game and see how it goes.”