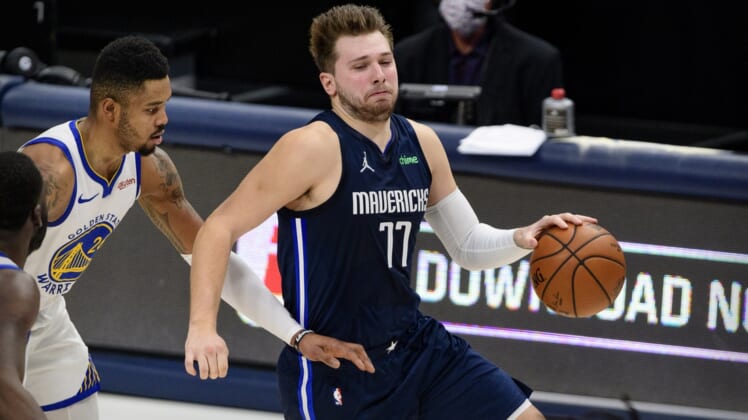 The surging Portland Trail Blazers begin a three-game road swing Sunday in Dallas, facing a Mavericks’ team coming in on its own hot streak.

The Trail Blazers won their third straight and fifth in their last six on Friday, with a decisive 129-110 defeat of Cleveland.

“Each game was a very solid win in its own way,” Portland coach Terry Stotts said in his postgame teleconference. “I liked the way we played in each of those games in a different way.”

Portland opened its three-game winning streak, and a three-game homestand, by holding Orlando to 97 points. That marked the Trail Blazers’ lowest defensive yield of the season.

They closed the stand with their fourth-highest scoring game of the campaign, the byproduct of balanced offense. Four Trail Blazers scored at least 20 points: Gary Trent Jr. led the way with 26; Carmelo Anthony came off the bench for 23; Enes Kanter put up 21 with 13 rebounds; and season-long leading scorer Damian Lillard finished with 20.

Lillard’s performance also included nine assists. He heads into Dallas averaging 29 points and 7.2 assists per game, building a case for Most Valuable Player according to NBA.com’s top-10 ranking.

Lillard ranks just ahead of Mavericks star Luka Doncic, a preseason favorite for the award and catalyst of Dallas’ current winning streak.

The Mavericks lost six straight from the end of January into the beginning of February, but have since won four straight and five of six.

Doncic went off for a career-high 46 points and also had 12 assists and eight rebounds as Dallas posted a season-high 143 points in a 13-point win Friday over New Orleans. The Mavericks also got a season-best 36 points from Kristaps Porzingis, who made a career-high eight 3-pointers.

“We’re on the right path,” Porzingis said in his postgame teleconference. “We’re going to keep working on that chemistry and keep making sure that both of us are playing on a high level.”

Dallas has been electric offensively during its winning streak, averaging 130.5 points per game. Friday’s win was the first by more than five points, however, and the third in their last five in which the Mavericks surrendered at least 130 points.

Entering Saturday, Portland was tied for No. 4 in the NBA in scoring offense at 115.2 points per game. The Trail Blazers and Mavericks run close to each other defensively, allowing 115.1 and 114.4 points per game. Dallas scores 112.7 per game.

Sunday’s meeting is the first between the two this season, and the sixth of seventh straight at home for Dallas. In addition to tipping off a three-game road swing, Sunday marks the first game of a stretch in which Portland plays six of seven on the road.

The Trail Blazers remain without CJ McCollum. The 26.7-points per game scorer last played on Jan. 16 due to a foot injury. Post players Zach Collins (ankle) and Jusuf Nurkic (wrist) are also out with injuries.

Dallas comes in completely healthy. The reversal of their recent fortunes coincided with the returns of Dorian Finney-Smith and Maxi Kleber, two reliable role players.