The disappointment of losing the last game is not difficult to digest for the Tampa Bay Lightning.

The New York Islanders scored three times in the second period and then held on for the 3-2 victory on Saturday to even their Stanley Cup playoffs semifinal series at two wins apiece.

However, as the Lightning prepare to play host on Monday, it’s with a valued element in their pocket, and not just because they are the defending champions.

“It’s a best-of-three,” Lightning forward Tyler Johnson said. “You have to look ahead; you have to move forward. This game, you can’t change anything now, so we’ve got to try to learn from mistakes, be ready to play a full 60 minutes. You get that home ice back, and we have to use it to our advantage.” 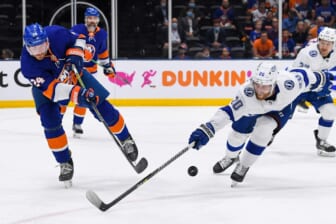 The Lightning have a better road record (6-2) than home mark (4-3) in the playoffs, but that doesn’t diminish their confidence heading into this crucial clash. Besides, their disappointing second period on Saturday provides some extra motivation.

“It was red rotten, that second period,” Lightning coach Jon Cooper said. “These guys have given it their all for whatever it’s been now, a month and change, and sometimes you lay an egg. We laid one in the second period. It was unfortunate because you don’t play well sometimes, the breaks don’t go your way.”

Led by Brayden Point’s early tally that extended his goal-scoring streak to seven games, the Lightning pushed back in the third period, but the big break Cooper alluded to went against his squad.

As time was about to expire, Tampa Bay’s Ryan McDonagh made a jaw-dropping spin-a-rama play to deke New York goaltender Semyon Varlamov, but Islanders defenseman Ryan Pulock blocked the shot that appeared headed into the yawning net.

“The situation that we’re in and how deep we are in the playoffs and how important these games are, obviously there’s probably no situation like this that I’ve had before,” Pulock said. “Obviously it feels good to score goals, but when you can save a game like that and get the win like that, it’s a good feeling.

“I just tried to make myself big. I saw it coming in and I got a glove on it. It did kind of rattle there, and I just tried to take away all the net as much as I could and just push it to the side and not let it get through me.”

While Pulock’s goaltender impersonation will be most remembered from this game, the Islanders were full measure for their victory. Yes, they were led by goals from Josh Bailey and Mathew Barzal — who netted his sixth goal in eight games — but New York had seven players record a point, including the game-winner by Matt Martin, his first goal of the playoffs.

“Different nights, different guys are stepping up,” Bailey said. “You need that in the postseason if you’re going to make a run.”

The Islanders have outscored opponents 23-10 in the second period during the playoffs amidst a strong outing.

“Our game was good,” New York coach Barry Trotz said. “I know that we probably had more chances when I look at the game. … Our 60-minute game was pretty decent other than the seven or eight minutes where they surged on us, and we had a surge earlier. This is what we expected, 2-2 going back (to Tampa). It’s a best-of-three now.”