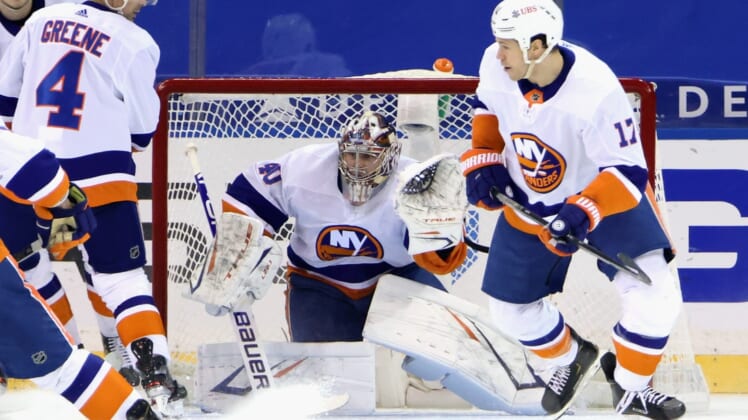 No one needs to remind the New York Islanders and Pittsburgh Penguins how quickly the trajectory of a season can change when it consists of 56 intra-divisional games.

The host Islanders will look to maintain their momentum while the Penguins will hope to reverse course Thursday night, when the longtime rivals are scheduled to meet in Uniondale, N.Y.

The Islanders earned their second straight win Monday, when Casey Cizikas and Matt Martin scored in the third period of a 2-0 victory over the host New York Rangers. The Penguins, who have lost two in a row, will be playing their second consecutive game at Nassau Coliseum after falling to the Islanders, 4-3, on Saturday night.

Like Tuesday’s win, the Islanders’ victory on Saturday was fueled by a pair of third-period goals. After the goals by Cal Clutterbuck and Anders Lee completed the comeback from a 3-2 deficit and snapped New York’s losing streak at five games (0-3-2), head coach Barry Trotz said the win was as essential as “a starving person needing food, that’s probably how bad we needed it.”

The Islanders were a little less famished Monday but no less relieved to get the victory and a bit more breathing room in the tightly packed East Division. Entering Wednesday, the East was the only division in which every team had at least 10 points.

“We’re collecting points, and it’s all that matters at this point,” said Islanders goalie Semyon Varlamov, who stopped all 30 shots he faced in recording his third shutout of the season. “I’m excited we won today. Huge win for us. That was a big win.”

The Penguins have already ridden multiple rollercoasters within the season’s first 11 games. After being outscored 11-5 in a season-opening pair of losses to the Philadelphia Flyers, Pittsburgh posted points in six of its next seven games, a span in which all five of its wins were earned by one goal, including four in overtime.

The point streak ended with a 3-1 loss to the Rangers on Feb. 1, but the Penguins are trying not to get too consumed with the jumbled nature of the East Division while also staying aware of how valuable each point has already become.

“I don’t think you think too much into it (the standings), but I think you know you’ve got to start getting points because they’re so hard to come by in this division,” said Penguins center Jake Guentzel, who gave Pittsburgh a brief lead by scoring 3:19 into the third period Saturday night. “We’ve seen a lot of games that are close, so we’ve just got to make sure we’re getting points we can, and it starts now. We’ve just got to make sure next game we try and get two points.”

The Penguins will enter Thursday’s rematch without left winger Jared McCann, who suffered a lower-body injury Saturday and was described as week-to-week by head coach Mike Sullivan on Wednesday. The Islanders’ Anthony Beauvillier, who hasn’t played since suffering a lower-body injury Jan. 24, will be out again Thursday.