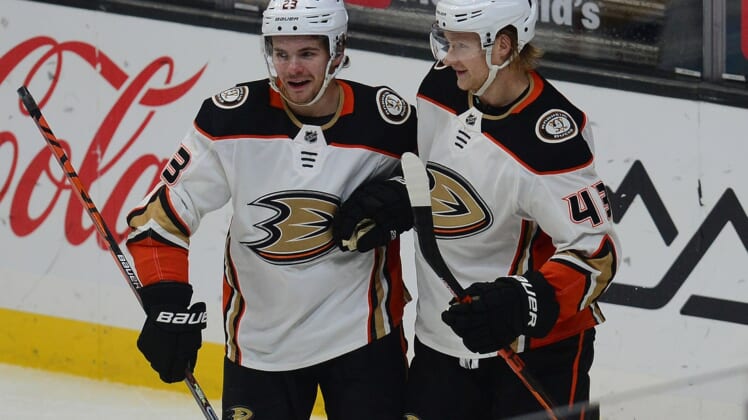 Finally back on the ice, the Minnesota Wild now can work on syncing up all parts of their game when they pay a visit to the Anaheim Ducks on Thursday.

The Wild completed a two-week COVID-19 related pause when they faced the Los Angeles Kings on Tuesday and absorbed a 4-0 defeat. They looked slow early, as expected, and then failed to capitalize late.

Thursday’s game between the Wild and Ducks will be the first of consecutive games between the teams, with the second contest set for Saturday.

The Ducks continue to work on consistency issues, going 3-2-1 since the start of February. They will enter Thursday’s home game coming off a 3-2 defeat at San Jose on Monday.

The Wild still are trying to get players back into the fold. Jonas Brodin, Ian Cole, Brad Hunt and goalie Cam Talbot all were out as they remained in COVID-19 protocol. Jared Spurgeon did not play on Tuesday because of an upper-body injury.

Minnesota did have Mats Zuccarello for the first time this season after he underwent offseason arm surgery, while defenseman Calen Addison made his NHL debut. Matt Dumba also returned from a lower-body injury. More players could be back Thursday.

Out of need Tuesday, the Wild even reunited the line of Joel Eriksson Ek, Marcus Foligno and Jordan Greenway in the third period but to no avail.

“We didn’t see a lot of chemistry in the lines, so we just kind of went back to what we know and what has been successful,” Wild head coach Dean Evason said. “They kept the puck in a few times and did what they have done when they have been together, and we had some nice looks with them.”

The Ducks have traded wins and losses over the past six games and return home where they are 1-2-1 going back to Jan. 30. They have scored four goals in two of their last five games, after not reaching that total in any of their first 11 contests, but they did not win either game.

On Monday, the Ducks played a solid first and third period, but the difference was the Sharks’ two-goal second period. San Jose had a 13-4 advantage on shots in the second period and a 29-28 advantage in the game.

“We pushed back (in the second period) and everything, but at the end of the day, it just wasn’t enough,” the Ducks’ Sam Steel said. “It’s just the little plays, burying the puck. We hit a few posts. Or making a simple 10-foot pass. That’s what we need to get better at. It just comes down to a little bit of execution.”

A goal from Steel gave the Ducks a 1-0 lead less than a minute into the game. Max Comtois added a goal in the third period. Comtois leads the Ducks with seven goals and nine points.