PREVIEW: Vegas Golden Knights look to get back on track against Los Angeles Kings 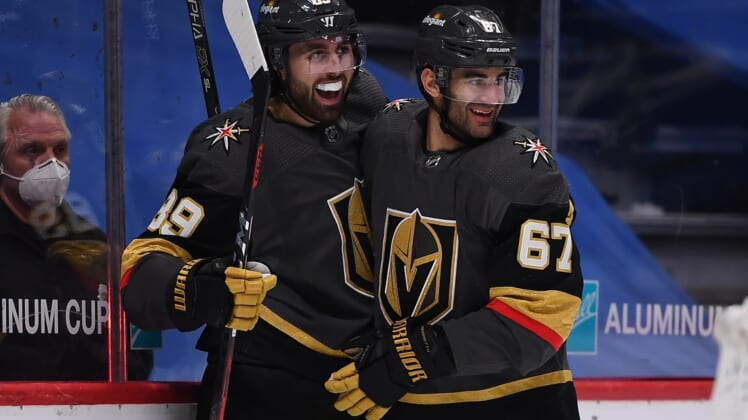 Off track a bit over the last week-plus, the Vegas Golden Knights will get another crack at the team that bumped them into their recent wobble.

After a five-game winning streak and victories in 11 of 13 games, the Golden Knights are just 2-2-0 over their last four in a slip of performance that started with a 3-1 road defeat March 21 to the Los Angeles Kings.

That defeat came in the second of two games the teams split in Los Angeles, with another two-game set to open at Las Vegas on Monday.

The Golden Knights will enter Monday’s game following a spirited duel atop the West Division standings with the Colorado Avalanche. In the opener of back-to-back games at Colorado on Thursday, the Golden Knights fell 5-1 to the Avalanche to forge a tie atop the division.

In the rematch Saturday, the Golden Knights delivered their response as Max Pacioretty scored just shy of two minutes into the extra period to give the Golden Knights a 3-2 victory and move them back on top of the division by a single point.

Pacioretty also had an assist on Alec Martinez’s first-period goal and now has four overtime goals this season. He has a team-leading 18 goals and is two shy of 300 for his career.

“We knew we had a lot to prove after getting spanked in the last game,” Pacioretty said. “But at the end of the day I thought we really stepped on the gas as the game went on in the third period. (We) created a lot of opportunities and drew a lot of penalties. I think that momentum carried over.”

There was no carry-over momentum for the Kings after they defeated the Golden Knights a little more than a week ago. The Kings’ Sean Walker had the opening goal in that victory and had an assist on Jeff Carter’s third-period clincher.

From there, though, the Kings went on to lose a pair of games at San Jose, including a 4-2 decision on Wednesday. The Sharks are one of two teams beneath the Kings in the West standings, and Los Angeles could have used a pair of positive results to bolster its playoff chances.

Los Angeles is in sixth place in the division, five points behind the fourth-place St. Louis Blues, who currently hold the final playoff spot in the West.

“We seem to kind of hang around and play better when we’re playing the teams at the top of our division, which is not a good thing,” Kings defenseman Drew Doughty said. “We need to win these games if we want to (make the) playoffs. No disrespect to San Jose. They’re just a team that I think is more equal to us than a team like Colorado or Vegas.”

The Kings did get some help for their offense, acquiring forward Brendan Lemieux in a trade Saturday with the New York Rangers. Los Angeles gave up a fourth-round pick in this year’s draft.

Lemieux had two goals and five assists in 31 games for the Rangers and was a junior league teammate with current Kings forwards Gabriel Vilardi and Andreas Athanasiou.