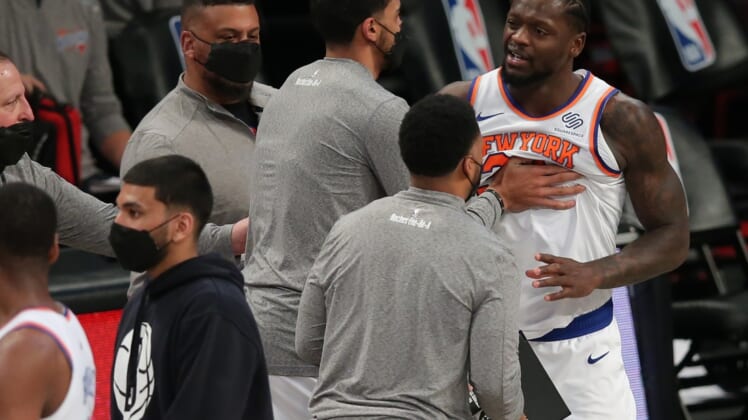 Mar 15, 2021; Brooklyn, New York, USA; New York Knicks power forward Julius Randle (30) is restrained by coaches and players after being called for a travel at the end of the game against the Brooklyn Nets at Barclays Center. Mandatory Credit: Brad Penner-USA TODAY Sports

The Philadelphia 76ers will look for their sixth consecutive victory when they host the New York Knicks on Tuesday.

The Knicks will aim to bounce back from a frustrating 117-112 road loss to the Brooklyn Nets on Monday in which they cut an 18-point deficit down to three in the final seconds. An apparent erroneous call by a referee in late going ended New York’s hopes.

The Sixers crushed the San Antonio Spurs 134-99 on Sunday even without Joel Embiid. The All-Star center is expected to be sidelined for a minimum of two weeks due to a bone bruise on his left knee.

Tobias Harris led the way with 23 points, nine rebounds and seven assists. The Sixers are 17-3 this season when Harris scores 20 or more points.

Whether playing alongside Embiid or backup centers Dwight Howard and Tony Bradley, Harris has been effective utilizing the big men with the pick-and-roll.

“We talked about it at the beginning of the season, just the evolution of being a good pick-and-roll player is being able to knock down the mid-range jumper, finish down the lane and then make plays out of it,” Harris said.

“We just looked like we were playing with pace, moving the ball and playing with each other,” Simmons said. “I think it was good overall. I think we were just finding the open man.”

Since returning from the All-Star break, the Sixers have won their three games by an average of 27.6 points. Without Embiid, it obviously won’t be easy to keep rolling.

“None of them are going to be Joel,” Philadelphia coach Doc Rivers said of the backup bigs. “We understand that, so we’re going to just move it around to see what works.”

The Knicks worked to get back into their game Monday behind 12 fourth-quarter points from Julius Randle, but they couldn’t catch the Nets.

Randle continued his stellar play with 33 points, 12 rebounds and six assists in 41 minutes. With New York trailing by three with 3.2 seconds left, Randle was whistled for a controversial traveling violation. He went up for a potential game-tying 3-point shot but came down with the ball after it appeared Kyrie Irving touched the ball.

Randle was visibly agitated as he had to be held back by teammates from confronting the officials. On his way to the locker room, Randle threw a chair out of the way.

“Whatever happened is what it is and it’s in the past,” Randle said postgame.

Randle earned his first All-Star berth this season, and his performances have been consistent all season. In fact, he already has become the first Knick to produce two triple-doubles in the same season since Mark Jackson in 1988-89.

“This season, the numbers speak for themselves,” Knicks coach Tom Thibodeau said. “But his impact on winning is huge. His leadership has been terrific.”

The Knicks could be without Elfrid Payton (hamstring), Derrick Rose (COVID-19 protocols) and Austin Rivers (personal reasons) once again against the Sixers.

Since Thibodeau was hired, the Knicks have resembled a different team. They’ve become defensive-minded and more resilient than in the past. Following losses, New York generally has come back strong. The Knicks won the game after each of their past five defeats before Monday’s setback.

“I think that’s the challenge of the season,” Thibodeau said. “It’s a long year. You can’t take and carry over what happened in one game to the next. You have to learn from it. When we lose, that’s what I want us to do. I want us to learn and move it forward and get ready for the next one.”