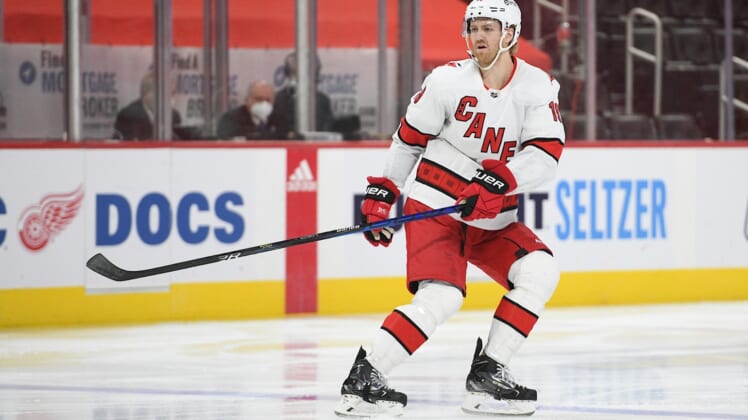 An eight-game winning streak has moved the Carolina Hurricanes from the middle of the pack in the Central Division to the top of the standings.

They’ll try to keep the good vibes going when they face the Red Wings in Detroit on Tuesday night.

In their latest triumph on Sunday, the Hurricanes took a different path to success. They didn’t score a power-play goal for the first time since the streak began but instead used an unassisted shorthanded goal to break a scoreless tie.

The Hurricanes posted a 2-1 victory over Detroit, holding the Wings scoreless until the final 10 seconds.

“We have confidence in our group that we can win every game if we play our style and our game,” Carolina defenseman Dougie Hamilton said.

Hamilton’s shorthanded goal was the first of his nine-year NHL career.

“Everybody is chipping in,” said forward Nino Niederreiter, who scored Carolina’s other goal. “That’s exactly the key to our success right now.”

Entering Monday, Carolina had an NHL-best 31.8 percent success rate on the power play. And its penalty-killing unit was ranked ninth in the league at 82.8 percent.

In a relatively clean game, the Hurricanes killed off both of Detroit’s power-play opportunities.

“The penalty kill was really solid. That was the difference in the hockey game,” Carolina coach Rod Brind’Amour said. “We had the one (power play) and could have had a couple more. We always talk about that special teams are a huge part of the game, and we were definitely good (Sunday) there.”

Goaltending also has played a pivotal role. Alex Nedeljkovic, who began the season as the third option, nearly recorded his second shutout of the season. In his past six starts, Nedeljkovic is 5-1-0 with a 1.49 goals-against average.

“Goaltending is so important. That position is pivotal,” Brind’Amour said. “You’ve got to have it. It gives your whole group confidence when you know your goalie can bail you out of crazy situations.”

The Red Wings had scored a season-high six goals against Tampa Bay in their previous game Thursday night. They were stymied Sunday until Anthony Mantha’s tip-in spoiled Nedeljkovic’s shutout bid.

Detroit is 1-4-1 over its past six games and 1-3 against Carolina this season. Coach Jeff Blashill said he believes his team needs to be more aggressive in the offensive zone.

“We were super sloppy with the puck, and then we didn’t have even close to good enough of a shooting mentality,” he said. “We passed up opportunities to shoot it. As a result, we didn’t create chaos until the third. We had some good chances in the third; it became a little more hectic of a game at that point.

“Sometimes from a coach’s perspective, fan’s perspective, reporter’s perspective — we all want them to shoot the puck more. This year we’ve done a fine job of it, but we have gotten a little bit away from it, especially from our defensemen being ready to one-time pucks.”