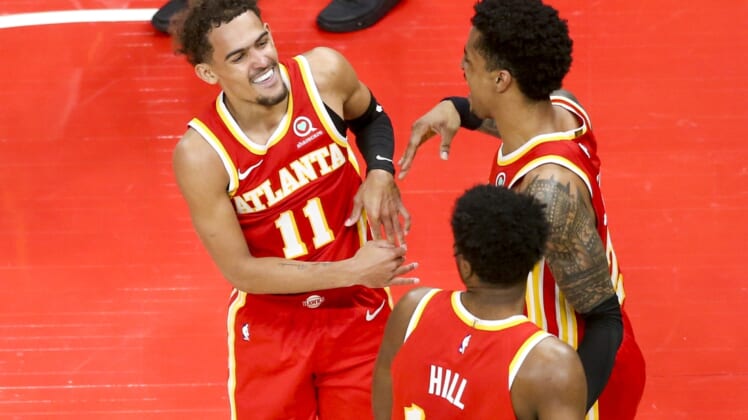 Rarely do things pan out following a midseason coaching change as splendidly as they have for the Atlanta Hawks, but what has transpired under interim coach Nate McMillan certainly qualifies as a best-case scenario.

The Hawks improved to 3-0 under McMillan with their 100-82 victory over the Cleveland Cavaliers on Sunday and will look to extend their season-long winning streak when they visit the Houston Rockets on Tuesday.

Atlanta, following a number of offseason acquisitions that yielded great expectations, appeared to be on the brink of collapse when Lloyd Pierce was dismissed just prior to the All-Star break. In a somewhat miraculous turn, the Hawks have found their footing and hit a stride under McMillan despite fielding a roster hamstrung by injuries to Clint Capela (heel), De’Andre Hunter (knee) and Cam Reddish (Achilles), a trio expected to contribute to the Hawks’ ascension.

“We’ve been talking about this all season long: next man be ready to play,” McMillan said. “Especially with the schedule we have coming up, you never know when your number is going to be called.

“We continue to show growth and continue to understand how to finish and how to win these games playing in the fourth quarter. That’s a process of learning how to win ballgames. Getting stops defensively, executing offensively and we’ve been able to do that these last few games.”

The Hawks appear to have benefited from the veteran touch McMillan brings to the bench. With 16 seasons as a head coach under his belt including stops in Seattle, Portland and Indiana, McMillan has authored a smooth transition in Atlanta. The disarray and discord that appeared to undermine Pierce have given way to organization and cohesion that is getting results.

“It’s obviously different each game but I definitely feel like (Coach McMillan) is trying to change things over his way slowly but surely,” Hawks forward John Collins said. “Obviously it’s a process and not something that he can just come in as a new coach and put all this stuff on us. It would be really tough.

“He’s doing a great job of making small changes here and there and implementing what he wants to implement slowly, and it’s successful.”

The Rockets’ injury carousel should continue in earnest against the Hawks. Ben McLemore (ankle) and David Nwaba (wrist) are likely to be sidelined on Tuesday, joining a list of regulars already unavailable: Christian Wood (ankle), John Wall (knee) and Eric Gordon (groin). Danuel House Jr. (knee) has been upgraded to questionable after missing the previous four games.

Even with House potentially back in the fold, the odds are stacked against Houston snapping its NBA-worst 16-game losing skid, with a setback against the Hawks putting the Rockets in the ignominious position of matching the franchise record for consecutive defeats. The Rockets dropped 17 consecutive games during their inaugural season in San Diego in 1967-68.

The clearest objective facing the Rockets is to keep their collective chins up.

“We’ve got to continue to stay optimistic and keep getting better as we start to get healthy,” Rockets guard Victor Oladipo said. “Even when we get healthy we won’t be perfect, but our approach and mentality have to be the same, and that’s trying to win. That’s the only thing that matters.”