PREVIEW: Grizzlies hope for help for Ja Morant in Game 3 vs. Jazz

Now that the visiting Utah Jazz have gotten a boost from Donovan Mitchell, the underdog Memphis Grizzlies will attempt to get help for Ja Morant when the Western Conference clubs continue their best-of-seven playoff series with Game 3 on Saturday night.

Mitchell returned from a 17-game absence — including Game 1 of this first-round series — to contribute 25 points to Utah’s 141-129 home win in Game 2 on Wednesday.

The victory evened the series after the Grizzlies took advantage of Mitchell’s absence to surprise the top-seeded club 112-109 in Game 1 on Sunday.

The 15-point flip-flop in scores was mostly a result of 3-point shooting. 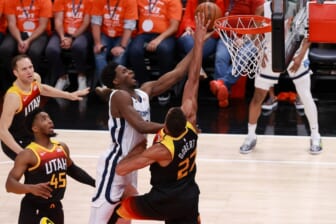 Also Read:
WATCH: Utah Jazz bounce back with rout of Grizzlies to even series

While Jazz players were quick to note that his return had made a difference, Mitchell turned the table and credited his teammates for helping him.

“We did a lot of really good things, so it made my job easier,” said Mitchell, who had been out with a sprained ankle. “I didn’t have to come in and just do everything. I was able to just find my spots and attack and just kind of just do what I do.”

Morant was able to do that as well for Memphis, but without nearly the same amount of help. His 47 points featured 15-for-26 shooting from the field and a pair of 3-pointers.

All five Memphis starters scored in double figures, but the Grizzlies’ reserves combined for just 14 points — shooting just 6-for-20 from the field, including 2-for-9 on 3-pointers.

For the series, Utah has outscored Memphis 76-33 off the bench, with Jordan Clarkson (30 points) nearly outscoring Grizzlies reserves by himself.

Rookie Desmond Bane has been the scoring leader among Memphis’ backups with 13 points.

Morant said he believes things will be different on Memphis’ home court, where the Grizzlies were last seen beating San Antonio in an elimination game to start the play-in tournament last week.

“Home-court advantage with our crowd: I can’t wait to return the favor of what they did to us,” Morant said, referring to Games 1 and 2 in Salt Lake City, where three fans were removed and subsequently banned indefinitely following Game 2 for verbal abuse. “We’re excited. It’s 1-1, and our mindset right now is to go home and use the home court to take Game 3.”

The clubs met just once in Memphis during the regular season, with Utah winning 111-107 in March to complete a six-day, three-game sweep of the season series.

The Jazz didn’t have Mitchell for that game, but the result otherwise mirrored Game 2 in that Clarkson (24 points) outscored the Memphis bench (13), and Utah won despite 36 points from Morant.