PREVIEW: Everything on the line for Golden Knights, Wild in Game 7

After failing to close out their West Division first-round series with the Minnesota Wild for the second straight game on Wednesday night, the Vegas Golden Knights are taking the glass-is-half-full approach heading into Friday night’s Game 7 in Las Vegas.

“This is what it’s all about,” Golden Knights coach Peter DeBoer said. “This is why you work your (butt) off all season, to have the record you have to host this game in your building and give yourself the best opportunity (to win).”

“It’s an exciting opportunity,” said forward Reilly Smith. “Our fans are going to be full of energy and are going to be pretty loud, so let’s make the most of it. … It’s stuff we dream about as kids.”

Vegas has never hosted a Game 7 in its short history and also has never clinched a playoff series at T-Mobile Arena.

The Golden Knights looked in total control of the series after sweeping two games in Saint Paul, Minn., to take a 3-1 lead.

But the Wild, despite being outshot 40-14, including 21-1 in the second period, clawed back to win 4-2 in Game 5 in Las Vegas, and then they evened the best-of-seven series on Wednesday night at home. Cam Talbot turned aside 23 shots for his second shutout of the series, and Kevin Fiala had a goal and an assist during a three-goal third period in the 3-0 victory. 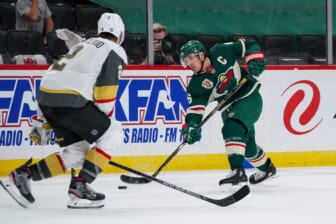 Minnesota will be playing its fourth Game 7 in its playoff history. The Wild are 3-0 in those contests, all of which were played on the road, with the last one taking place in 2014.

“It feels like just a second ago it was 3-1, and you’re down in the dumps and trying to get back in this thing,” said Wild forward Zach Parise. “And now it’s one game and see what happens.”

“I think the players deserve a lot of credit for just believing and believing in each other,” said Minnesota coach Dean Evason. “I think that’s been the key, not just in the playoffs, it’s been the key from Day One. This group plays hard for each other, and they’ve stuck together and tonight was no different.”

“That’s what I love about this group,” added Talbot. “We can be down but we’re never out. We just keep persevering.”

This is the third straight season that Vegas had had to play a Game 7 after blowing a 3-1 lead in a playoff series. The Golden Knights defeated the Vancouver Canucks 3-0 in the bubble in Edmonton last season to win their Western Conference second-round series, but they lost 5-4 in overtime to DeBoer’s San Jose Sharks in 2019 to drop that first-round series.

Since 1942, teams have rallied from 3-1 deficits to win a playoff series 29 times. San Jose was the last to do it against the Golden Knights in 2019.

Vegas captain Mark Stone was asked if the mood in the locker room was anger, disbelief or frustration after his team failed to close out the series again on Wednesday.

“It’s not disbelief,” Stone replied. “We believe in ourselves and believe in our team. We have one game in our home rink to move on. It’s that simple.”

The winner will have little time to celebrate. The NHL announced Thursday afternoon that the second-round series with No. 1 seed Colorado will begin on Sunday night in Denver.

DeBoer said that leading goal scorer Max Pacioretty, out since May 1 with an undisclosed injury, and forward Tomas Nosek would both be game-time decisions. He said the team was still awaiting test results on forward Ryan Reaves, a late scratch before Game 6, to determine to his status.