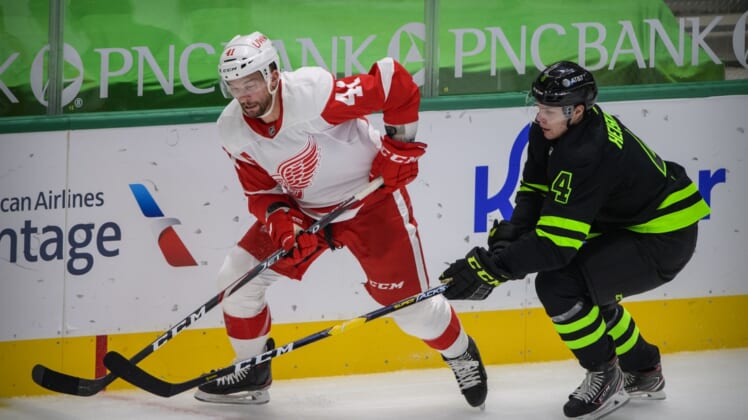 The Detroit Red Wings got some production from unexpected sources on Saturday. They’re hoping that blossoms into a more diversified offensive attack during their six-game homestand.

The Wings wrapped up a 2-4 road trip with a 4-2 victory over the Nashville Predators. They begin an 11-night stretch in Detroit on Monday with the first of back-to-back games against the Chicago Blackhawks.

In Saturday’s win over the Predators, Luke Glendening and Adam Erne scored their first goals of the season. Glendening’s goal was his first in 42 contests and he also enjoyed his first career three-point night.

“I don’t think we’re a team that’s going to score a crazy amount of goals, unfortunately, but some nights you are going to need guys you wouldn’t expect to score every night to score,” Erne said.

Glendening’s value goes beyond scoring stats. He’s won 66 percent of his faceoffs, the best mark in the league.

“He’s a big piece of our team,” coach Jeff Blashill said. “He can win big faceoffs, he’s a heart-and-soul guy. Our guys know what he brings to the table. For him to get rewarded offensively is good, I think he has worked very hard at his skill set to make himself a better hockey player.”

The Wings began their trip with a 5-1 clunker against Tampa Bay. They were much more competitive in their last five games. The victory on Saturday avenged a 3-2 loss two nights earlier when the Predators scored a last-minute goal.

“I think we’ve played pretty good five games in a row here since we got embarrassed against Tampa. So it’s good to find ways to win,” Blashill said. “I thought we came out after what was really a gut-punch loss the other night where they scored with a minute to play. We talked about it as a group, that these are the moments that really show your character and you have to find a way to play great hockey.”

Chicago recorded two home victories over Detroit last month by scores of 4-1 and 6-2. At the time, the Wings were missing a handful of players due to the league’s health and safety COVID-19 protocols.

The lopsided nature of those wins stands out for the Blackhawks, since most of their subsequent games haven’t been decided in regulation. Their last three victories have come in overtime, and three of their other 10 games since facing Detroit have gone to overtime or shootouts.

Alex DeBrincat scored the game-winner 35 seconds into overtime on Saturday in Chicago’s 3-2 home win over Columbus. DeBrincat has collected the decisive goal in three of the Blackhawks’ last five outings.

“He’s got another level that he’s reached here,” Chicago coach Jeremy Colliton said. “We all see the offensive production and that’s what gets the headlines — and he can do it. You can never have enough guys who produce and produce in big moments.”

The Blackhawks begin a six-game road trip on Monday. Those long journeys include the added challenge of dealing with COVID-19 protocols.

“We know the rules, we follow them, do the right thing, do the best we can to prepare,” Colliton said. “It’s up to us to find a way to get it done.”