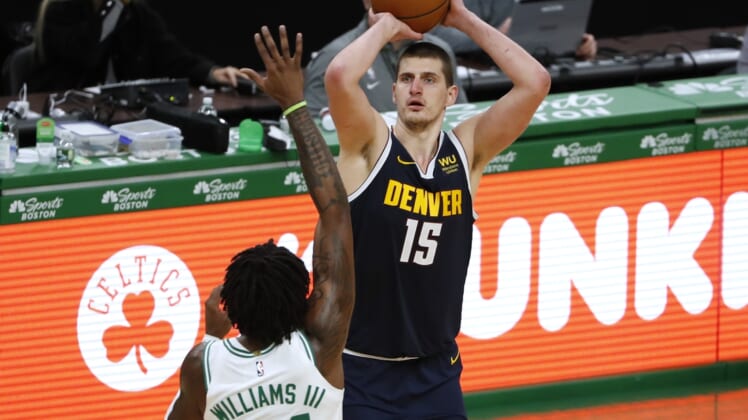 The Denver Nuggets have dropped two in a row overall and five straight road games heading into Friday’s contest against the host Cleveland Cavaliers.

Friday’s tilt came about after some fancy footwork by the NBA. The league shuffled this game, initially targeted for the second half of the season, to Friday to replace Denver’s game against Charlotte. That contest was postponed on Tuesday due to additional contact tracing on the Hornets’ roster.

Getting back to the Nuggets, they began what became a three-game winning streak with a decisive 133-95 victory over Cleveland on Feb. 10. The tables have turned, however, as Denver sustained losses at both Boston and Washington to begin its four-game trek.

Nikola Jokic isn’t to blame for Nuggets’ recent troubles, as he followed up his 43-point performance in a 112-99 setback to the Celtics on Tuesday with 33 more the following night in a 130-128 loss to the Wizards. Jokic, in fact, scored 15 points in the first quarter to stake Denver to a 41-21 lead over Washington.

Jamal Murray scored 25 points against Boston and highlighted his 35-point performance versus the Wizards with a 3-pointer from the edge of the midcourt logo with 2.1 seconds left in the fourth quarter. The long-range bucket forged a tie before Bradley hit two foul shots with a tenth of a second remaining.

“I would sum it up by saying you have to play 48 minutes,” Nuggets coach Michael Malone said. “… The guys are (angry). We obviously came on this road trip trying to build on the three-game win streak that we had.”

Malone noted that he is uncertain about the length of absence expected for Paul Millsap (10.4 points, 5.2 rebounds), who has missed the last two games because of a strained left knee. He made 7-of-8 shots for a team-leading 22 points in Denver’s romp over Cleveland last week.

Jokic collected 12 points and 12 assists and Murray had eight points in that victory against the Cavaliers, who have seen the bottom fall out after somewhat of a promising start to their season.

Cleveland has lost a season-high eight in a row, with seven of those setbacks coming by 17 points or more. The Cavaliers followed up their 38-point defeat to Denver with a 19-point pummeling at Portland, a 17-point setback against the Los Angeles Clippers and a 31-point gouging at Golden State.

“You have to look in the mirror and be honest with yourself and see areas you can improve,” Cleveland coach J.B. Bickerstaff said following Monday’s 129-98 loss to the Warriors. “And we’ve got room to grow.”

Jarrett Allen had 18 points and 10 rebounds in the previous meeting with the Nuggets and had 13 and 14, respectively against Golden State. The in-season acquisition is seeing extended playing time while the Cavaliers sit center Andre Drummond as a means to keep his trade value ahead of the March 25 deadline.

Five-time All-Star Kevin Love returned to practice on Wednesday after being sidelined with a calf strain initially sustained in the Cavaliers’ preseason opener on Dec. 12. He is unlikely to play against the Nuggets, with Sunday’s game against the Oklahoma City Thunder a more likely option.