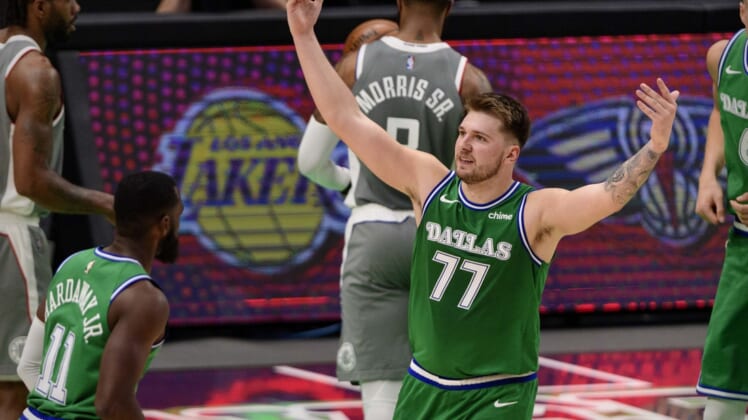 After an entertaining two-game set against a championship contender, the Dallas Mavericks head into another back-to-back challenge when they travel to Portland to face the Trail Blazers twice this weekend.

The teams will meet Friday night and Sunday night.

The Mavericks enter off a statement 105-89 home victory over the Los Angeles Clippers on Wednesday, two days after the Clippers stormed into Dallas and earned a 109-99 win.

The Trail Blazers, in the meantime, were involved in their own short series, defeating the New Orleans Pelicans 125-124 on Tuesday and prevailing 101-93 in the rematch on Thursday. Both games were in Portland.

Luka Doncic flashed his greatness for the Mavericks in the Wednesday victory. He scored the last of his 42 points on a one-foot runner in the lane, then kept two hands in the air, fingers aflutter to bring on the adulation from the limited crowd.

The sequence was worthy of the praise. Matched against a top defender in the Clippers’ Paul George, Doncic moved to his right, flashed the ball in front of him on the dribble, prompting George to reach for it, then reeled it in, cut left toward the lane and hit his shot to seal the victory.

It was the fourth time this season Doncic reached the 40-point mark, and the effort came with nine assists, six rebounds, three steals and two blocked shots.

“They’re a really good defensive team,” Doncic said. “They have really amazing defenders, so it’s kind of tough. I think these past two games, we played hard, and that’s how we’ve got to be ready for the playoffs if we make it.”

The Mavericks will at least get a day of rest following a playoff-like effort before competing again. The Trail Blazers will not be as fortunate with games on consecutive days.

The best news of all, though, was the return of CJ McCollum, who has played two games since returning from a two-month absence caused by a hairline fracture in his left foot. He scored 10 points in 26 minutes Tuesday and 11 points in 21 minutes Thursday.

As McCollum returns to the mix, the Trail Blazers figure to have all the offense they need. Now it is time to work on their defense, as they did Thursday against the Pelicans.

“One thing we’re good at, and have always been good at, is finding a way to win a game,” Lillard said. “But when you constantly scratch and claw and find a way and you don’t do certain things defensively consistent enough … it’s hard to win like that all the time.”

Following a four-game losing streak to close out February, the Trail Blazers have won six of eight this month.

The Mavericks and Trail Blazers are hovering near the No. 6 spot in the Western Conference, with only the top six teams earning a bye into the first round of the playoffs. Teams in the seventh through 10th spots will enter a play-in tournament.

It raises the stakes for both teams with just under two months remaining in the regular season.

“The burning question is, where do you take it from here?” Mavericks coach Rick Carlisle said after his team’s victory Wednesday.