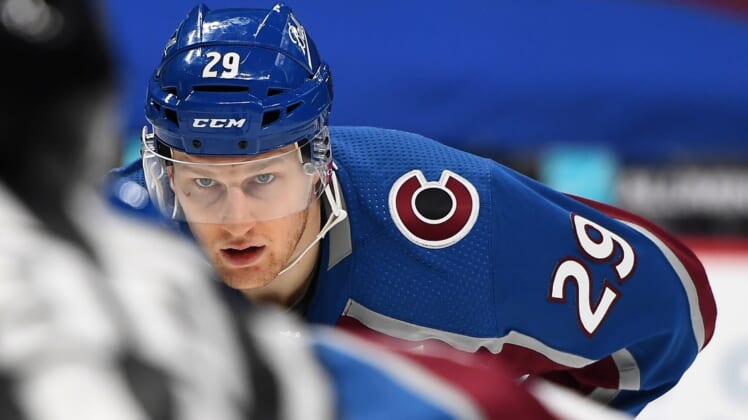 The Colorado Avalanche end an 11-day break following a COVID-19 outbreak when they visit Las Vegas on Sunday to play the first of four consecutive games against the Vegas Golden Knights.

It will mark the first time since a 2-1 victory over the Minnesota Wild on Feb. 2 that the Avalanche will take the ice for a game. After that contest, Colorado went into an eight-day layoff and quarantine due to the NHL’s COVID-19 protocol.

The good news for the Avalanche is that three of six players out of the lineup with injuries at the time of the shutdown will be able to play on Sunday, including star forward Nathan MacKinnon, who missed the Feb. 2 victory against the Wild with a lower-body injury. Also back will be defenseman Devon Toews (foot) and ex-Golden Knights center Pierre-Edouard Bellemare (lower body).

“I’ll definitely be playing,” MacKinnon said following the team’s practice on Saturday. “I feel good. I feel ready to go.”

The Avalanche, who won four of their last five games before the break, will have three practices under their belt to try to prepare.

“I feel really, really good coming back,” said MacKinnon, who leads the team with 14 points and 12 assists. “I feel like I haven’t had any rust or anything, so I’m excited to start. Hopefully get into a rhythm here and start playing every other day again.”

“It’s definitely weird to have that time off in the middle of the season,” Avalanche defenseman Ryan Graves said. “Pretty much all of us are just staying inside a lot right now and keeping our exposure to the least amount possible. I was working out in the gym in my condo building, and we went on some walks and a couple hikes and things like that, but for the most part just kind of laying low and basically just waiting to start up again.”

Vegas knows the feeling. The Golden Knights have won four of five since a nine-day COVID-19 break that sidelined its coaching staff as well as defenseman Alex Pietrangelo. Vegas will be without forward Tomas Nosek, who was yanked before the third period in a 5-4 win over Anaheim on Tuesday. According to the NHL, Nosek was pulled “upon notification” that he had returned a positive test for COVID-19.

The Golden Knights will be facing a quick turnaround after parlaying three power-play goals into a 3-1 victory at San Jose on Saturday afternoon. It was Vegas’ first game at the SAP Center since head coach Peter DeBoer was hired on Jan. 15, 2020, just five weeks after being fired by the Sharks.

“These games are never easy when you’re coming back into a situation like this,” DeBoer said. “It was great to catch up with some people here that I’ve got a lot of time and respect for and really went through a lot of wars with over the four or five years I was here. That was the nice part.”

DeBoer said his Golden Knights, who have dropped their past four regular-season meetings with Colorado, including 6-1 and 7-3 decisions last season in Las Vegas, are looking forward to the four-game series with the Avalanche. The set includes a Saturday afternoon contest outdoors on a golf course in Lake Tahoe next weekend.

“I know our guys are excited,” DeBoer said. “I think this is a chance to see a real good team up close and personal. It’s going to be a great challenge for us.”