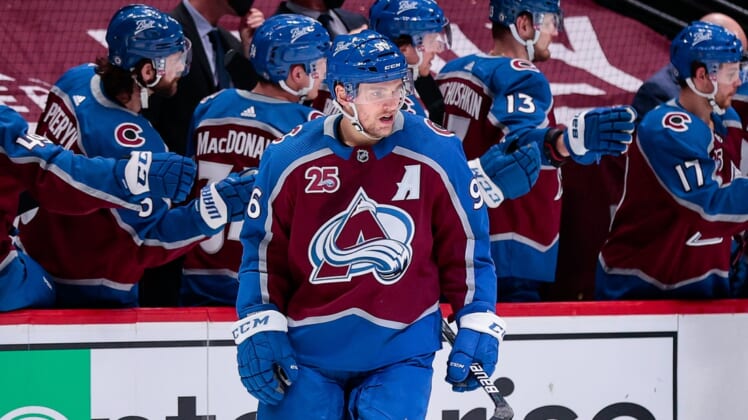 Some teams struggle after they are forced to pause for health and safety protocols related to COVID-19 issues. The Minnesota Wild are not one of those teams.

Minnesota has surged after a two-week hiatus in February that included five postponed games. The Wild are 12-3-1 since returning and just finished a perfect five-game homestand to climb into second in the West Division.

They now head to Denver to face the Colorado Avalanche on Thursday night, the first of two games against the team that is just a point behind them in the standings. The second game between the rivals, Saturday afternoon, wraps up Colorado’s nine-game homestand and it can end it on a high note.

The Avalanche started their longest homestand in more than a decade 1-1-1 but have won the last four, including an 8-4 victory against the Anaheim Ducks on Tuesday night. Colorado had to rally from down 4-2, with goaltender Philipp Grubauer coming in after his backup Hunter Miska allowed four goals on seven shots.

“Hunter would like to make another save or two in the first period, but I think we hung him out to dry,” coach Jared Bednar said after the win. “It’s not something you want to do with a young goaltender who’s coming in and trying to build some confidence.”

Tuesday was supposed to be a day of rest for the workhorse ahead of a showdown with Minnesota, but it looks like he will be logging plenty of time in the near future. The good news is Grubauer doesn’t see a lot of shots when he plays. The Avalanche have allowed fewer than 30 shots on goal in 17 straight games, a franchise record, and four times teams haven’t reached 20 shots.

The last team to have more than 30 shots against Colorado is the Wild, who had 33 in an overtime win on Jan. 31.

Minnesota won’t have defenseman Carson Soucy on Thursday. The league suspended him for one game for his hit on Arizona’s Conor Garland in a 3-0 win over the Coyotes on Tuesday night.

The Wild are also without forward Marcus Foligno, who hasn’t played since Friday because of a lower right leg injury.

“That’s not a guy you really replace,” center Nick Bonino said. “Whenever someone goes down, as long as I’ve been playing, you try and do it by committee. Different guys will have to step up. He’s a guy that wants to be out here, probably kills him not to be, so we’ll work hard for him when he’s out for sure.”

The Avalanche are also dealing with injuries, but they might get one or two players back Thursday. Defenseman Bo Byram and center J.T. Compher were near a return from upper-body injuries against Anaheim, and the team’s move to put defenseman Dan Renouf on waivers signals Byram might be ready.

Byram and fellow defenseman Cale Makar took part in Wednesday’s optional practice. Makar is expected to be out for the near future while defenseman Erik Johnson and goaltender Pavel Francouz remain on the long-term injured list.