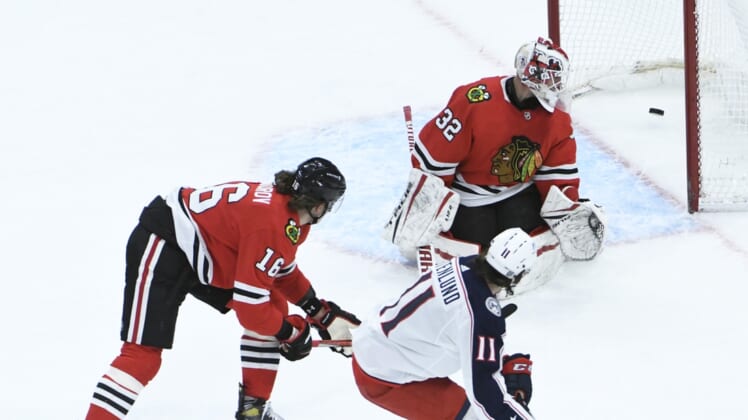 The Columbus Blue Jackets will go for their third straight win — and their second in a row against the Blackhawks — when they take the ice Saturday night in Chicago.

Columbus is coming off a 6-5 win over the Blackhawks on Thursday in the opener of a back-to-back set. It marked the Blue Jackets’ highest-scoring game of the season.

Chicago led 3-1 and 4-2 before Columbus rallied. Michael Del Zotto scored with 2:41 remaining in the third period to even the score at 5-all, and Kevin Stenlund provided the go-ahead goal with 1:14 to go.

“This is an avenue that we’re going to have to find more often, is to outscore a team,” Blue Jackets coach John Tortorella said. “We haven’t done (it) that often, so this is a road we haven’t been down too often.”

The loss snapped a terrific stretch for Chicago, which had earned at least one point in 10 of its previous 11 games. It was only the second regulation-time loss for the Blackhawks since Jan. 22.

“We did little things as the game went on that gave them momentum,” Blackhawks coach Jeremy Colliton said. “We’ve got to manage the puck better and have some killer instinct in the third period when we have the lead.”

Blackhawks goaltender Kevin Lankinen endured a rare difficult night in what has been a strong rookie season. The Finland native allowed six goals on 43 shots after giving up three goals or fewer in seven of his last eight games.

For Columbus, goaltender Joonas Korpisalo picked up a victory despite giving up five goals on 26 shots. He improved to 5-3-2 with a 3.34 GAA and .893 save percentage. Fellow netminder Elvis Merzlikins is 2-2-1 with a 2.76 GAA and .913 save percentage while making five starts, compared with Korpisalo’s 10 starts.

Atkinson offered high praise for Kane from an opponent’s point of view.

“He’s one of the most dangerous players, especially when he’s feeling it,” he said. “Everyone seems to keep their eyes on him when he has the puck, and that’s when he makes those plays and seam passes. Luckily, we came out on the winning end (Thursday).”