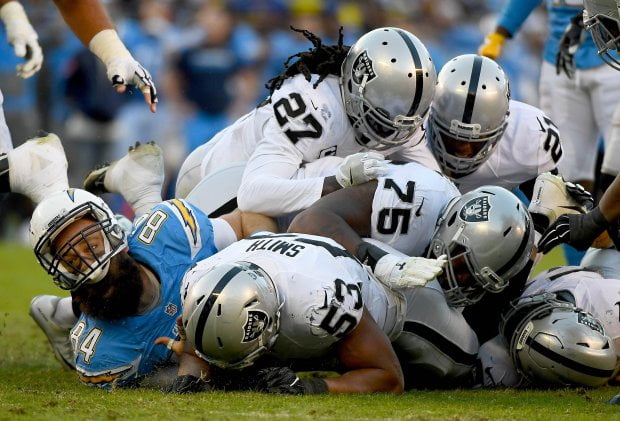 Each week the staff of the Las Vegas Raiders Report will give you our prediction for the final score of the Raiders game. With a staff full of former sports editors, sports writers, and gaming experts, here’s some informed picks for this week’s game vs. the Chargers.

A tale of two Carrs. Will Raiders fan see the Derek Carr that has a 4 game win streak vs the Chargers, or the Carr with a flat tire they saw in Washington and Denver? I expect Carr will come out on fire vs a bad Chargers defense and hang close to 40 on them in a wild west shootout.

Game will be close and Philip Rivers will throw one of his patented game-losing interceptions late in the fourth quarter to seal the victory.

I’m sorry to be the bearer of bad news Raider Nation but Derek Carr isn’t ready to play. He’ll struggle and EJ Manuel will enter the game at some point to try and help the Raiders struggling offense. the LA defense is awful but I expect the Chargers to run the ball with success against the Raiders and send them to their fourth-straight loss.

The sad-sack Chargers can still put points on the board and I expect this to be a typical AFC West barn-burner. I expect Derek Carr to struggle as I don’t have the belief he’s 100%. Philip Rivers will throw a late interception and the Raiders will halt their losing streak at three games in an important division win for Oakland.