Prediction for each NBA award heading into the All-Star Break

With the NBA heading to its annual All-Star Break, it’s time to take a step back and check in on where the Association is at more than a half of the way through the season.

The defending champion Golden State Warriors boast the best record in NBA history through 52 games (48-4). Meanwhile, the San Antonio Spurs are right on their heels out west.

Now heading into what should be a fun weekend, here’s our predictions for each major NBA award at this point in the year.

This is going to be close to unanimous should Curry continue at his current rate. The best player on a squad that boasts the best record heading into the All-Star Break in the history of the Association, Curry is redefining the game of basketball.

Including the five three pointers he hit Wednesday night in Golden State’s 11th consecutive win, Curry has already hit the seventh-most treys in NBA history for a single season. The Warriors still have 30 games left. At his current pace, Curry will shatter his previous record by about 100 three pointers.

With an effective field goal percentage of .632, the level of domination Curry is displaying on the offensive side of the court is nearly unmatched in the history of the NBA.

Put it this way. Curry is averaging 1.5 points per shot this season. For comparison’s sake, the best Michael Jordan did in that category was back in 1989-90 when he put up 1.4 points per shot.

While it’s a team-wide statistic, it’s also important to note that Curry heads into the All-Star Break with a NBA-best plus-minus of 15.4 points per game. This means that the Warriors are outscoring their opponents by nearly a half of point every minute Curry has been on the court this season.

These are simply stunning statistics. And in reality, they tell us a story of a player in Curry that should repeat as league MVP.

This rookie No. 1 overall pick is coming off a career-best 35-point, 11-rebound performance in an impressive win over the Toronto Raptors on Wednesday.

He’s now averaging 17.1 points, 10.1 rebounds and 1.8 blocks per game while shooting 54 percent from the field this season.

Comparing him to another former No. 1 pick from Kentucky, Anthony Davis averaged 13.5 points and 8.2 rebounds as a rookie for the then New Orleans Hornets back in 2012-13.

Already ahead of the curve when it comes to both ends of the court, there’s a darn good chance Towns will find himself as an All-Star at some point in the not-so-distant future.

In terms of what Towns has done recently, he’s been on an absolute tear, averaging 23.2 points and 12.3 rebounds over the past nine games.

Stevens took over a depleted Celtics team that had just lost the likes of Kevin Garnett and Paul Pierce following the 2012-13 season. He proceeded to lead Boston to its second-worst record in two decades.

Surprisingly, Danny Ainge and the Celtics brass made the right decision in taking the long-term approach with the former Butler head coach.

Stevens rewarded Boston’s faith by leading the team to a playoff appearance last season. This came with pretty much an entirely new roster than the one Doc Rivers led to the playoffs in his final six years as the team’s head coach.

Now, this year, Stevens has his Celtics as a top-three seed in the Eastern Conference heading into the break.

He’s taken a journeyman guard in Isaiah Thomas and turned him into an All-Star performer. The likes of Jae Crowder, Avery Bradley and Evan Turner — all afterthoughts before coming to Boston — are also playing at the highest levels of their careers.

While an argument can definitely be made for Toronto Raptors head coach Dwane Casey and Oklahoma City Thunder head man Billy Donovan to win this award, it’s pretty darn clear that Stevens should take home this award if the Celtics continue at their current pace. 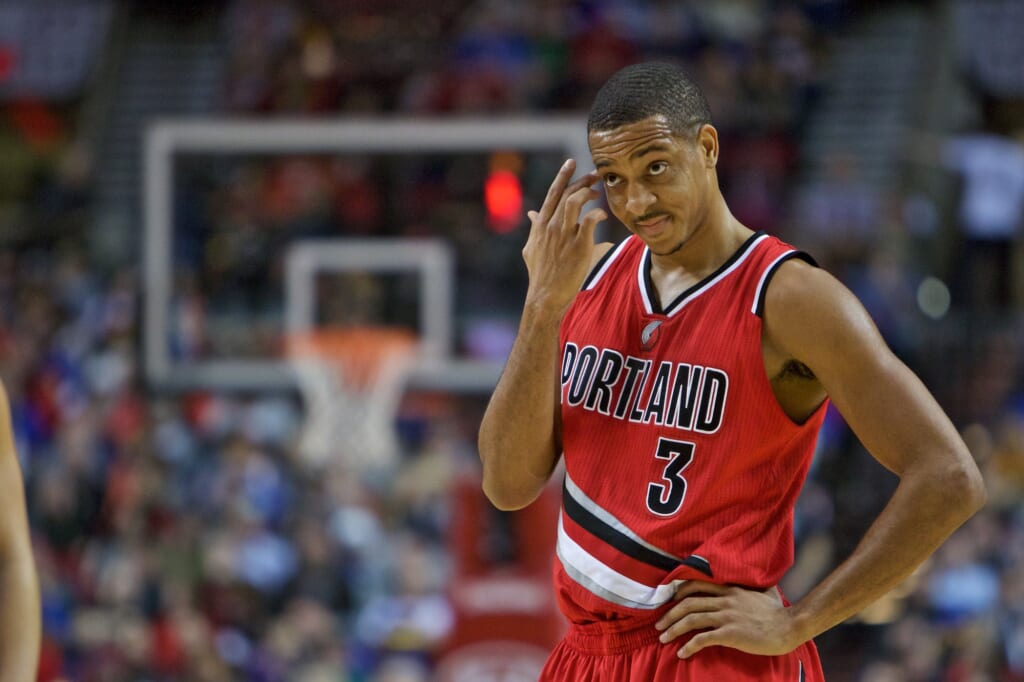 Once the Blazers were forced to reconsider their situation when LaMarcus Aldridge jetted to the Spurs in free agency, it became readily apparent this former Lehigh standout would play a more important role.

With that said, not a single person outside of the Blazers’ organization envisioned what McCollum would do in the first half this season.

The 24-year-old guard is averaging 20.8 points and 4.4 assists per game while shooting 39 percent from three-point range thus far.

As much as the Blazers seemingly lost their franchise when Aldridge left, things are certainly looking up.

They head into the All-Star Break with a clear shot at a playoff spot in the Western Conference — something that was far-fetched at the start of the season. The backcourt combo of McCollum and Damian Lillard is the primary reason for this resurgence.

An award Green should have won last season, he faces an uphill battle to earn what was rightfully his before a ridiculous loophole in the voting went against him.

Kawhi Leonard and DeAndre Jordan, two players that boast better advanced metrics when it comes to their defensive performances, will definitely get a look when all was said and done.

With that said, there are indicators here that leads me to believe Green will get another strong look. He’s the top defensive player on a team that boasts the second-best defensive efficiency in the NBA. He’s averaging 9.6 rebounds, 1.3 blocks and 1.3 steals per game.

In addition to this, Green also ranks in the top 10 of the NBA in defensive rating and defensive win shares.

One of the very few bright spots in an otherwise disastrous season for New Orleans, Anderson has stepped up big time in an effort to at least keep the team in contention for a playoff spot back east.

The eighth-year forward is averaging 17.1 points and 6.0 rebounds while shooting 39 percent from three-point range on the season. He’s doing so in less than 32 minutes per outing while starting just six games on the year.