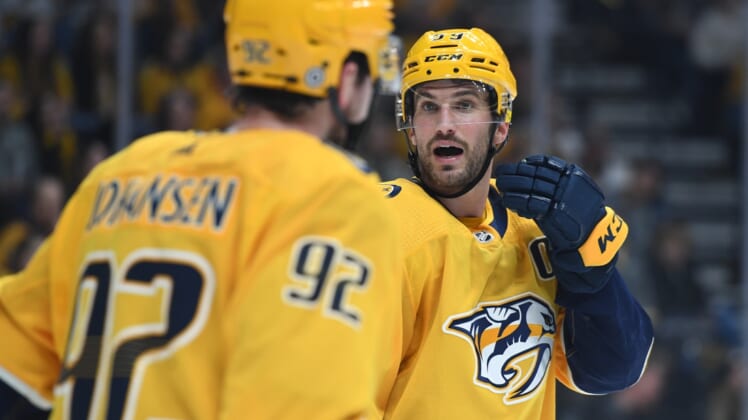 Following the league-wide COVID-19 shutdown, the Nashville Predators will look to resume their winning streak Wednesday night when they visit the Washington Capitals.

The Predators have won seven games in a row but have not played since Dec. 17, when they went overtime for a 3-2 win over the Chicago Blackhawks. Defeating the Capitals would bring Nashville into a tie for the second-longest winning streak in franchise history.

Alas, the same Nashville roster that powered the seven-game run won’t be the same group that takes the ice on Wednesday. Roman Josi, Colton Sissons, and Thomas Novak were placed on the COVID protocol list Monday, putting their availability for Wednesday’s game in question.

Josi leads the Predators in points (29) this season and has been the team’s leading scorer (three goals, six assists) during the winning streak.

The Predators announced Monday that Mikael Granlund, Ryan Johansen, Mark Borowiecki, Nick Cousins, Philip Tomasino, Ben Harpur, Michael McCarron and Matt Luff were activated from COVID protocols. McCarron and Luff were assigned to the taxi squad, and the others were placed on the active roster, though it remains uncertain who will be ready for Wednesday’s game.

“It’s not who’s out — it’s about the players that are in, and making sure we’re physically and mentally ready to play,” Nashville coach John Hynes said. “We feel like whoever is going to be in the lineup against Washington will certainly be ready to play at the level we need them.”

Neither the Predators nor the Capitals can afford to ease back into action, as both teams are battling for first place in their respective divisions.

The Capitals are looking to get on track after an inconsistent 4-3-2 mark in nine games before the shutdown. Washington’s last game was a 3-2 home loss to the Los Angeles Kings on Dec. 19.

With so many blue-liners potentially missing, the Capitals called up defenseman Michal Kempny from AHL Hershey and assigned defensemen Lucas Johansen and Alex Alexeyev to the taxi squad. Forward Brett Leason also was sent to the taxi squad, and goalie Pheonix Copley is on the active roster, likely replacing Vanecek.

“It seems like the D is taking a bit of a hit right now,” Capitals coach Peter Laviolette said. “But again, guys (are) also coming out of this that have been in protocol, and then away from the rink, or coming off being injured. It’s still not perfect. Once we do get everybody back, if that’s ever possible, we’ve got to get up to speed conditioning-wise as well.”

On the plus side for the Capitals, Nicklas Backstrom and Evgeny Kuznetsov cleared protocols and were at Monday’s practice. Tom Wilson also was skating after missing four games due to an upper-body injury.

The Predators have won their past eight meetings with the Capitals, with the last Washington win coming on March 18, 2016.