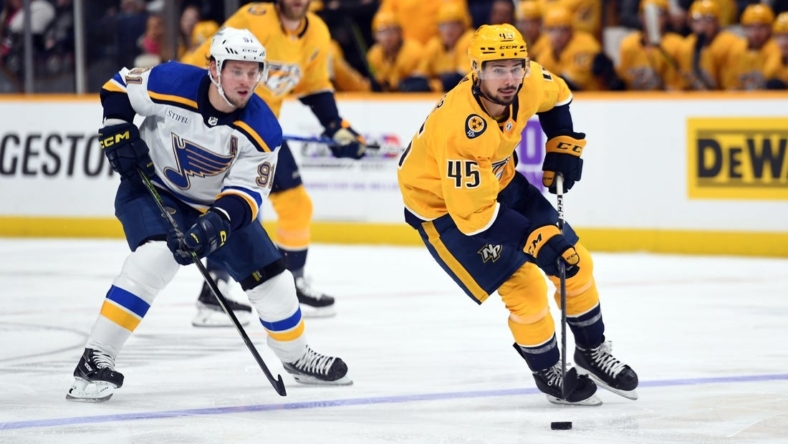 Roman Josi had a goal and two assists as the Nashville Predators defeated the visiting St. Louis Blues 6-2 Thursday to snap their five-game winless streak.

Tanner Jeannot, Michael McCarron, Zach Sanford, Ryan Johansen and Mikael Granlund also scored for the Predators, who were 0-4-1 since returning from the NHL’s Global Series in Prague.

Matt Duchene and Filip Forsberg had three assists for Nashville and goaltender Juuse Saros made 33 saves.

Robert Thomas and Brayden Schenn scored for the Blues, who have lost three consecutive games. Justin Faulk had two assists and Thomas Greiss stopped 35 of 40 shots.

The Blues struck first after Thomas won an offensive zone faceoff. Faulk fired a shot from the right point, and Thomas deflected it past Saros 67 seconds into the game.

But the Predators took charge after that, outshooting the Blues 15-8 overall in the first period.

Jeannot tied the game 1-1 with 3:04 left in the period. Colton Sissons won an offensive zone faceoff, Josi shot from the right point and Jeannot converted the rebound.

The Blues regained the lead with a power-play goal at 6:24 of the second period. Colton Parayko set up Schenn’s one-time blast from the right circle with a pass from the center point.

But the Predators responded with two goals in a span of 37 seconds late in the period. First McCarron jammed in the rebound off Josi’s shot from the left point.

Then Sanford put Nashville up 3-2 by circling the back of the net and stuffing a backhand wraparound shot inside the post.

The Predators made it 4-2 by converting a 3-on-1 rush just 71 seconds into the third period. Duchene led the breakout up the right wing, Forsberg fired a shot, and Johansen converted the rebound.

Josi pushed the lead to 5-2 by pounding a slap shot that caromed off the end boards, then off Greiss into the net on the power play. Granlund’s empty-net goal made it 6-2.