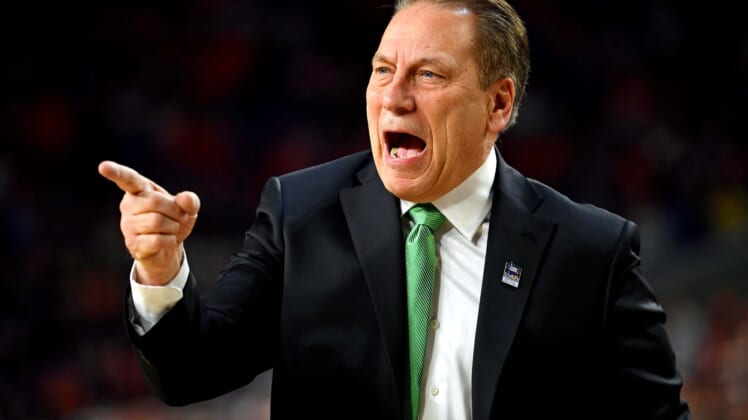 The college basketball season starts on November 5th, and just like every year, it will not disappoint. Once again, there are plenty of title contenders that could raise the trophy in Atlanta in 2020.

Who are the top 10 teams heading into this upcoming season?

Experience: Tom Izzo looks to lead an experienced squad that made it all the way to the Final Four in 2019, where they lost to Texas Tech. The Spartans bring back four core guys in Cassius Winston, Xavier Tillman, Joshua Langford and Kenny Goins.

Winston’s ways: As the senior point guard, Cassius Winston will be the main catalyst in running the Sparty’s offense. He came off a season where he averaged 18.8 points per game along with 7.5 assists a game.

Rocket power: Freshman Rocket Watts may have been Lamelo Ball’s teammate in high school, but he is a lot more that that. The high flying athletic guard will make a huge impact coming off the bench in East Lansing.

They’re back: Devon Dotson coming back, along with the return of Silvio DeSouza and Udoka Azubuike, could lead Kansas back a top the Big 12 standings. The duo of DeSouza and Azubuike may be the scariest front court in the entire country.

Bigger roles: Ochai Agbaji and Devon Dotson load up the backcourt, where they combined for 20.8 points per game last season. Expect that number to increase with the losses of Lagerald Vick and Quentin Grimes.

Loaded roster: Once again, Coach K adds another stacked recruiting class into the ACC. They may not have Zion, but they have the players to make up for his scoring. Freshmen Vernon Carey Jr., Cassius Stanley, Wendell Moore, and Matthew Hurt will all have a huge impact on the offense side of the ball in Durham.

Tre’s team: Duke nation was happy to hear that starting point guard Tre Jones decided to return for his sophomore campaign. The defensive stud can also bring scoring and experience to a young team.

Still dominant: They may not have the same hype as last year’s team, but this year’s Duke team will be based around the play of Tre Jones. The amount of offensive weapons with Jones’ passing ability is a force no team wants to face. Alongside all the incoming freshman are seniors Javin Delaurier and Jack White, who will most likely be the captains of this year’s Blue Devil squad.

Depth on depth: The return of Ashton Hagans, Nick Richards, and EJ Montgomery is huge in Lexington. Coach John Calipari adds the number two overall recruiting class in the country with plenty of guys who can ball out at any time.

Hagans’ time: The sophomore guard will be the main clamp on the defensive end for the Wildcats. Hagans led the team with 1.6 steals a game and continually frustrated his opponents with his lockdown defense.

Freshmen to watch: Tyrese Maxey and Kahlil Whitney are guys who will have a big impact for the Wildcats this upcoming season. Both are expect to be one-and-dones that have the athleticism to dominate for Coach Cal. They can both create offense for the Cats, who lost many of their best offensive players to the NBA.

Experienced crew: Out of the top-10 teams ranked here, Louisville brings back the most upperclassmen. Jordan Nwora, Dwayne Sutton, and Malik Williams return to their starting positions while Steven Enoch and Ryan McMahon will get an even bigger role off the bench for Chris Mack’s Cardinals.

So fresh, so clean: St. Joe’s transfer Lamarr “Fresh” Kimble will most likely take the starting spot of Christen Cunningham. Kimble averaged 15.6 points a game with the Hawks and will now be the facilitator with the amount of offensive weapons in Louisville’s arsenal.

Return of the Mack: Coach Chris Mack is back for another season where he will have he will be more comfortable with the team he has. Mack’s coaching is huge for a team loaded with experience along with freshman stud Samuell Williamson joining the rotation as another offensive weapon for the Cardinals.

Reloading: They may have lost key players like Rui Hachimura and Brandon Clarke, but the Zags reloaded. They will bring back starting center Killian Tillie and forward Filip Petrusev. Adding to them, transfers Admon Gilder and Ryan Woolridge will contribute alongside a loaded freshmen class headlined by forward Drew Timme.

Timme’s time: The number 41 overall player in the 2019 class, Drew Timme’s size and athleticism make him one of the biggest offensive threats for the Zags. He can space the floor, knock down outside shots, and has a great low-post spin move that is tough to stop.

Maker’s Mark: As always, Mark Few puts a team together that may not look dominant on paper, but they are always lurking in the top 10 every year. No one can overlook the Bulldogs because of Few’s ability to adjust his team to be the best.

Cole’s World: This Carolina team will be completely different from last year’s team, but it all starts with freshman point guard Cole Anthony. He nearly averaged a triple double at Oak Hill Academy and that production will be a huge impact in Roy Williams’ and the Tar Heels throughout the season.

Fear the frontcourt: Garrison Brooks and Sterling Manley are back for another season and they will be joined by four star recruit Armando Bacot. With the size and athleticism these guys have, no team wants to be in the paint when they are around.

Loaded backcourt: Even with Anthony at the point, the Tar Heels still have a ton of backcourt depth. Look out for Leaky Black, who was hurt toward the end of the season along with grad transfer Christian Keeling, senior Brandon Robinson, and incoming freshman Anthony Harris.

Returning starters: Colin Gillespie, Saddiq Bey, and Jermaine Samuels are back for another campaign where they will get a bigger role in Jay Wright’s offense. Look for Dhamir Cosby-Roundtree and Jeremiah Robinson-Earl to be starting at the Wildcat frontcourt come October.

Bryan Antoine: One of the top players in Nova’s 2019 recruiting class, Antoine could be a one-and-done prospect that makes a huge impact right away for the Cats. His athleticism and ability to hit from deep could put Villanova in the conversation for another national championship.

Price is Wright: Since 2007, Jay Wright’s Wildcats have only missed one NCAA tournament. With Wright being one of the most highly regarded coaches in the country, the expectation is that this experienced team will be a top-10 team throughout the season.

Fab Five part 2? Penny Hardaway will have the task of leading the best recruiting class in the nation. The expectations are high and the results could be historical. With James Wiseman, Precious Achiuwa, Boogie Ellis, DJ Jeffries, and Lester Quinones, they could surprise many as one of the toughest young teams in the NCAA.

The Wise man: As one of the top recruits in the 2019 class, Jame Wiseman could easily be a one-and-done prospect at Memphis. At 6-foot-11, Wiseman is very mobile and is tough to stop on the offensive end. He has a decent mid-range game and is a good rim protector as well.

Back at it: They may have lost in the second round of the 2019 tourney, but the Terps bring back everyone besides Bruno Fernando. This season will be a test for coach Mark Turgeon who has been scrutinized at times by Maryland fans for not doing well enough with the talent around him.

Cowan’s commitment: Junior guard Anthony Cowan is the leading scorer from last season that will be relied on in the offensive zone. Look for Cowan to be one of the most productive players in the Big 10 as he will has only gotten better since he joined Maryland.

Frontcourt duo: One thing to watch for with Maryland is the the big men of Jalen Smith and Chol Marial. Smith is a big who can shoot the ball from outside while the 7-foot-3 Marial can do damage on both ends of the floor for the Terps.