The NFL is becoming a pass-happy league, but some teams like the Denver Broncos, Green Bay Packers and Pittsburgh Steelers are better prepared than others to focus on an aerial assault.

But which of the three franchises boast the premier receiver units? And which teams could really use some help outside?

Sorry, tight ends and pass-catching running backs, only receivers were considered while making the list.

Sure, the team added Dwayne Bowe and Brian Hartline during the offseason, but the former caught zero touchdowns last season and the latter’s numbers dropped 50 percent from 2013 to 2014. Cleveland is hoping converted quarterback Terrelle Pryor can make an impact. At least the offensive line is tremendous.

Brian Quick is a breakout candidate, though it would be smart to temper expectations. Tavon Austin and Stedman Bailey were supposed to become the next great receiver duo, but that didn’t happen either. Kenny Britt rounds out a potential-filled, production-lacking unit.

Tennessee could be solid. Kendall Wright is a reception machine, and Dorial Green-Beckham has No. 1 receiver potential. However, Green-Beckham and Justin Hunter are unproven at the NFL level, and offseason signings Hakeem Nicks and Harry Douglas are, well, not very good.

Chiefs receivers combined for a grand total of zero touchdowns in 2014. Jeremy Maclin should change that, but Kansas City shouldn’t expect much from Jason Avant, Frankie Hammond, Junior Hemingway and Chris Conley. Running back De’Anthony Thomas and tight end Travis Kelce are the next-best options.

Mike Wallace was—and is—a speedy, inconsistent player. Charles Johnson had a couple good performances. Cordarrelle Patterson battled through a horrendous sophomore campaign. Jairus Wright won’t be a game-changer. Yet despite all that, Teddy Bridgewater can still make the Vikings relevant.

Chryst on @TorreySmithWR and @AnquanBoldin: "What a great combination. They worked together in Baltimore; its a genuine friendship." #C4M9

Torrey Smith and Anquan Boldin have been reunited in San Francisco, and the former Baltimore Ravens teammates should ease the ever-mounting burden on Colin Kaepernick. On the other hand, Quinton Patton, Bruce Ellington and DeAndrew White shouldn’t be expected to do the same in 2015.

The Jaguars have assembled a promising receiving corps in Allen Robinson, Allen Hurns, Marqise Lee and Rashad Greene. Jacksonville is a prime candidate to shoot up the rankings, though it wouldn’t hurt if quarterback Blake Bortles helped expedite the process.

Were it not for Kelvin Benjamin and Devin Funchess, Cam Newton and the Panthers would be in trouble. Jerricho Cotchery, Ted Ginn, Jarrett Boykin and Brenton Bersin are a slew of No. 4 receivers at best, but they’re likely to take turns as a second, third or fourth option.

A 36-year-old veteran, Steve Smith Sr. is still producing like he’s exiting his prime. Whether or not Smith Sr. can achieve that for one more season largely depends on what Breshad Perriman can accomplish from the outset. The rookie will likely be Joe Flacco’s favorite downfield target. 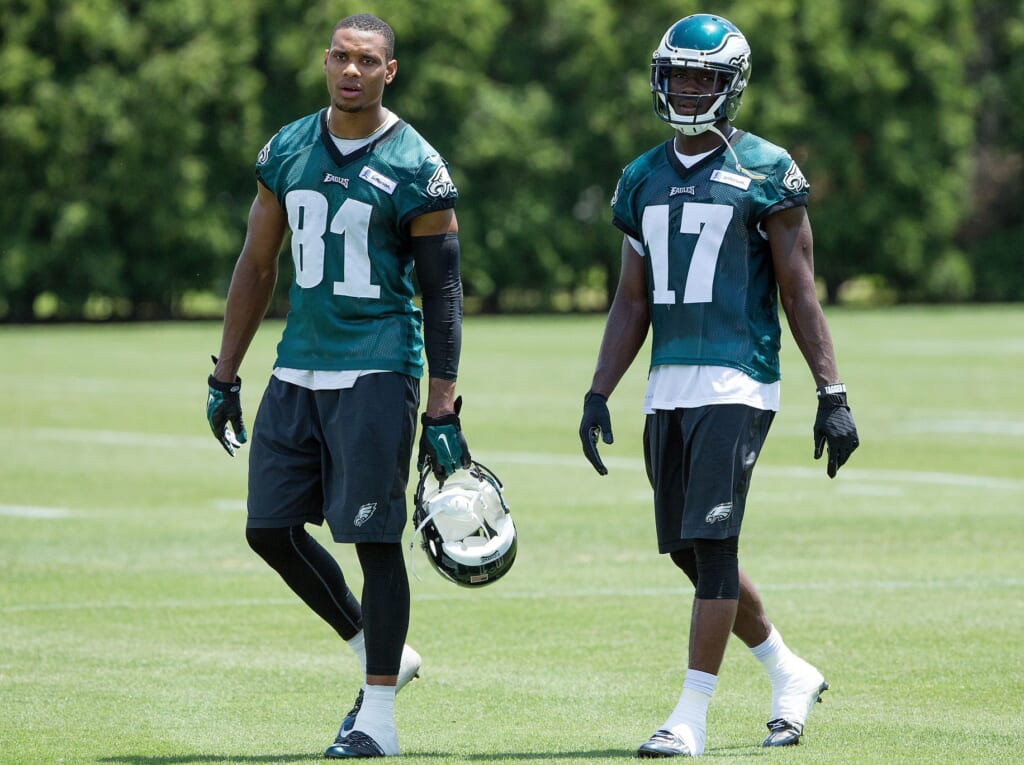 Jordan Matthews is bound to become a true No. 1 receiver, and rookie Nelson Agholor has the same ceiling. Riley Cooper remains a suitable target if not in a leading role, while Josh Huff gives Philadelphia a potentially impactful speedster. The group simply needs to prove it can produce without a star in Maclin.

Geno Smith has weapons at his disposal, so it’s time for the young quarterback to show improvement. Eric Decker, Brandon Marshall and Devin Smith—whenever he returns from a scary injury—compose a deadly-if-overlooked trio. But if Smith is sidelined for an extended period of time, New York’s lack of depth will be exposed.

It wouldn’t be surprising to see Amari Cooper develop into one of the league’s top receivers. Fortunately for the heralded rookie, he has Michael Crabtree as a complement. Though quarterback Derek Carr absolutely must improve his accuracy, that doesn’t mean Coop or Crab won’t be open.

Although Keenan Allen regressed mightily in 2014, it would be silly to discard the 23-year-old because of a disappointing campaign. Malcom Floyd actually outperformed Allen last season, which certainly wasn’t an optimal result. Jacoby Jones, Austin Pettis and Dontrelle Inman are battling for the starting slot position.

“I’m at the point in my career when I can’t take the pounding day after day,” Saints receiver Marques Colston recently said, per The New Orleans Advocate. And Colston is a starting receiver. Yikes. New Orleans does have a potential star in Brandin Cooks, so he atones for an unproven lineup of reserves (Nick Toon, Josh Morgan and Brandon Coleman).

Gone is Andre Johnson, but here stayed DeAndre Hopkins. The Texans selected sure-handed receiver Jaelen Strong in the draft and acquired Cecil Shorts via free agency, giving their yet-to-be-named quarterback a decent triumvirate with which to work. Consequent to Arian Foster’s season-shortening injury, the receivers must play a larger offensive role than expected.

Buffalo’s receivers are eerily similar to Houston’s, but the Bills get a slight edge due to NFL experience. Sammy Watkins and Robert Woods combined for nearly 1,700 yards last season, and Percy Harvin joined the tandem. Too bad Buffalo’s yet-to-be-named quarterback is bound to be borderline terrible.

Courtesy of USA Today Sports: As long as A.J. Green is healthy, he’s one of the NFL’s best individual receivers.

How much does one elite receiver mean to a whole unit? A.J. Green is the unquestioned star, and he’s responsible for carrying the Bengals’ passing attack. Behind Green, though, are Marvin Jones—who missed 2014 due to injury—Mohamed Sanu and Brandon Tate. That’s not a particularly imposing group.

It seems like receivers come to New England and are magically turned into productive players. Regardless, Julian Edelman is a reliable weapon, and Brandon LaFell can light up opposing secondaries. The only question is who Belichick’s next reclamation project will be and how great of an impact he has.

Individually, Mike Evans is a force. Vincent Jackson, though his best days are behind him, is still a suitable No. 2. But the remainder of Tampa Bay’s receiving corps includes Robert Herron, Kenny Bell and yeah, it’s not very good. Regardless, Evans and Jackson are a step above Cincinnati.

Don’t sleep on the Arizona receivers, especially when Carson Palmer is under center. Larry Fitzgerald is most productive when Palmer is slinging the ball, while Michael Floyd, John Brown and Jaron Brown are capable of bending defenses out of shape.

When scanning Seattle’s roster, a superstar receiver won’t be found. Nevertheless, the Seahawks’ pass-catchers get the job done. Doug Baldwin, Jermaine Kearse, Paul Richardson, Ricardo Lockette, Tyler Lockett and Chris Matthews form a well-rounded rotation that has a real argument to be ranked higher on the list.

DeSean Jackson and Pierre Garcon probably talk a little too much, but the duo remains a stout combination. Although Washington needs to find a true No. 3 receiver, Jackson and Garcon have the potential to tally 200 total receptions and 2,000 yards. Pretty good, eh?

The Bears aren’t expected to be a winning team in 2015. However, Alshon Jeffery and Kevin White each could break the 1,000-yard mark, while Eddie Royal and Marquess Wilson give Chicago a legitimate four-receiver set that can complement stud running back Matt Forte. 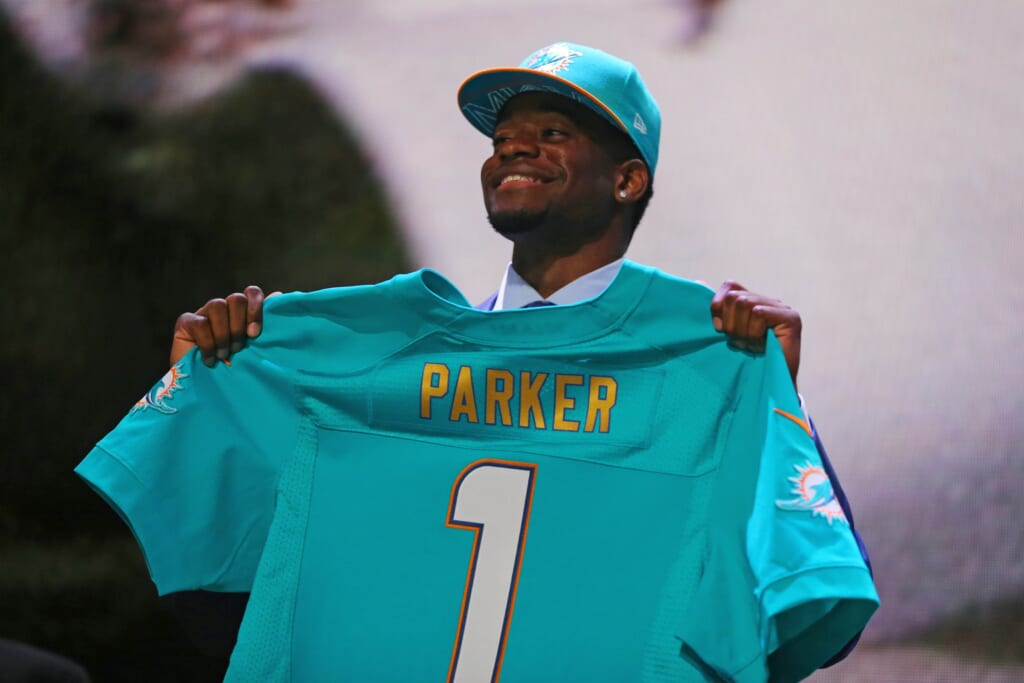 Dolphins fans should be excited about the future of their team, especially because of their receivers. 2015 first-rounder DaVante Parker, offseason acquisition Kenny Stills and 2014 draftee Jarvis Landry offer a high-upside unit of targets for blooming quarterback Ryan Tannehill.

It’s hard to argue that Dez Bryant is anything but the league’s No. 1 receiver, and he single-handedly propels Dallas to its No. 8 standing. Cole Beasley and Terrance Williams need to establish themselves as formidable options in third-down and red-zone situations now that running back DeMarco Murray moved on to Philly.

Julio Jones is only getting better, and Roddy White is dangerous as long as he’s not injured. Leonard Hankerson and Devin Hester won’t be spectacular, but they’ll do enough for Matt Ryan to necessitate regular snaps. Plus, keep an eye on rookie Justin Hardy, who set an NCAA mark for most career receptions.

Detroit has a problem, and his name is Matthew Stafford. But that’s a different story for another day, because Calvin Johnson and Golden Tate are the stars here. They amassed 170 catches, 2,408 yards and 12 touchdowns last season. What keeps the Lions from rising into the top-5 is their lack of a legitimate No. 3 receiver. Sorry, Jeremy Ross, Corey Fuller and Ryan Broyles.

Giants depth at WR: Odell Beckham, Victor Cruz, Rueben Randle and James Jones. Not to mention Vereen out of the backfield. Eli is happy.

Odell Beckham Jr. receives all the hype, and the second-year player deserves most of it. However, Victor Cruz is the forgotten man in New York because of a season-ending leg injury sustained in 2014, but he can return to the slot because of Reuben Randle’s presence on the outside. Eli Manning should throw for 4,000 yards and 30-plus touchdowns this year.

Plain and simple: Antonio Brown is the league’s most underrated wideout. Throw in rookie sensation Martavis Bryant and potential breakout candidate Markus Wheaton, and the Steelers’ receivers are a triad of big-play threats for Ben Roethlisberger. Pittsburgh is destined to finish 2015 as one of the most prolific offensive units.

While Demaryius Thomas is widely considered an elite NFL receiver, he might not be the best wideout on the Broncos. Emmanuel Sanders signed with Denver last season and exploded for 101 receptions, 1,404 yards and nine touchdowns. If Denver can get consistent production from Andre Caldwell or Cody Latimer, watch out. 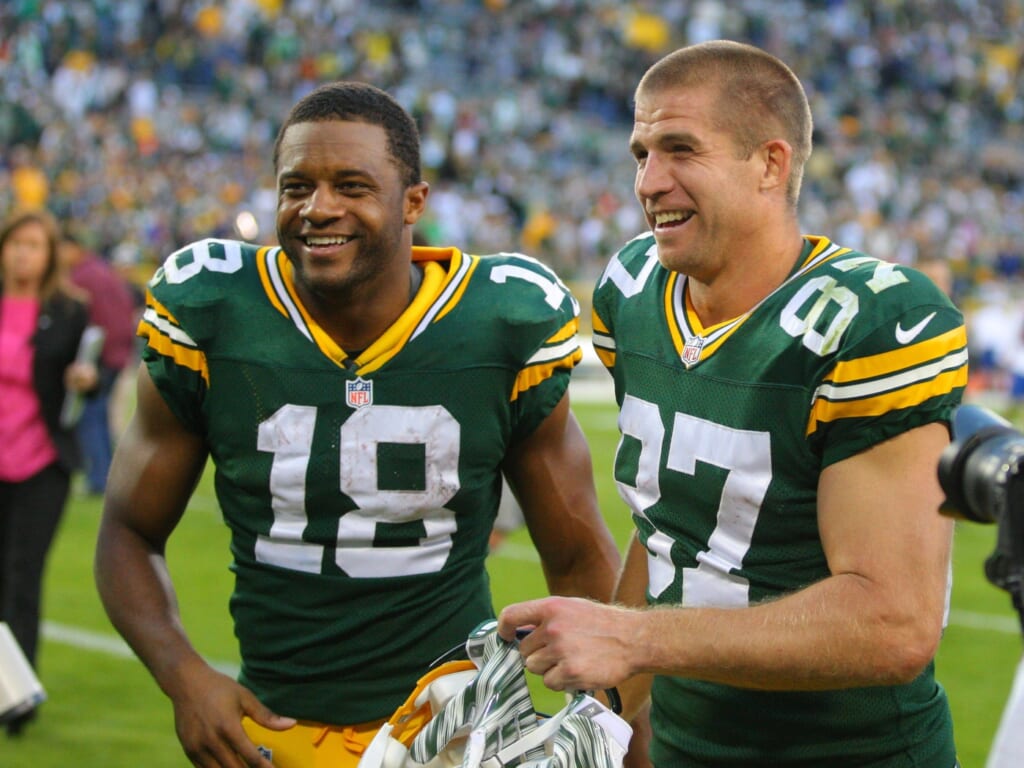 Courtesy of USA Today Images: Randall Cobb and Jordy Nelson are the NFL’s best duo. And Green Bay has more.