Position battles to watch on opening night of 2015 NFL preseason

The Hall of Fame Game kicked off the 2015 NFL preseason, but football fans will receive their initial look at a handful of meaningful position battles throughout the league on Thursday night.

From quarterback controversies on the East Coast to running back competitions in the West, there’s no shortage of position battles to observe during the first night of multiple exhibition matchups. The following are the most intriguing of the bunch.

The Saints sent All-Pro tight end Jimmy Graham to the Seattle Seahawks, and now there’s no clear-cut starter in The Big Easy. Josh Hill initially garnered the hype, but an undisclosed injury has sidelined the third-year player, allowing veteran Benjamin Watson to receive the first-team snaps. Hill now needs to earn the position most expected him to occupy for Drew Brees.

According to BYU Sports Nation, Dennis Pitta isn’t a lock to play in 2015. Plus, Owen Daniels signed with the Denver Broncos in free agency. Consequently, Joe Flacco and the Ravens must replace 64 receptions. Crockett Gillmore and second-round pick Maxx Williams are the main contenders for the No. 1 job. Gillmore has a slight edge due to his experience, but the raw talent of Williams could end up winning him the job as a rookie.

New York Jets at Detroit Lions: Rookies with a chance

Geno Smith’s bizarre jaw injury re-opened the Jets quarterback competition. Although reports steadfastly say Bryce Petty is not ready, the rookie at least has an opportunity to overtake journeyman Ryan Fitzpatrick. Perhaps the chance is at Dumb and Dumber levels, but it’s there nonetheless.

On the other side of the field, Detroit fans will watch third-round pick Ameer Adbullah for the first time. He’ll also be running behind Laken Tomlinson, a road-grading guard on the offensive line. Both players could earn a starting role for the Lions, and a strong showing during the preseason will certainly help them lock down a spot. 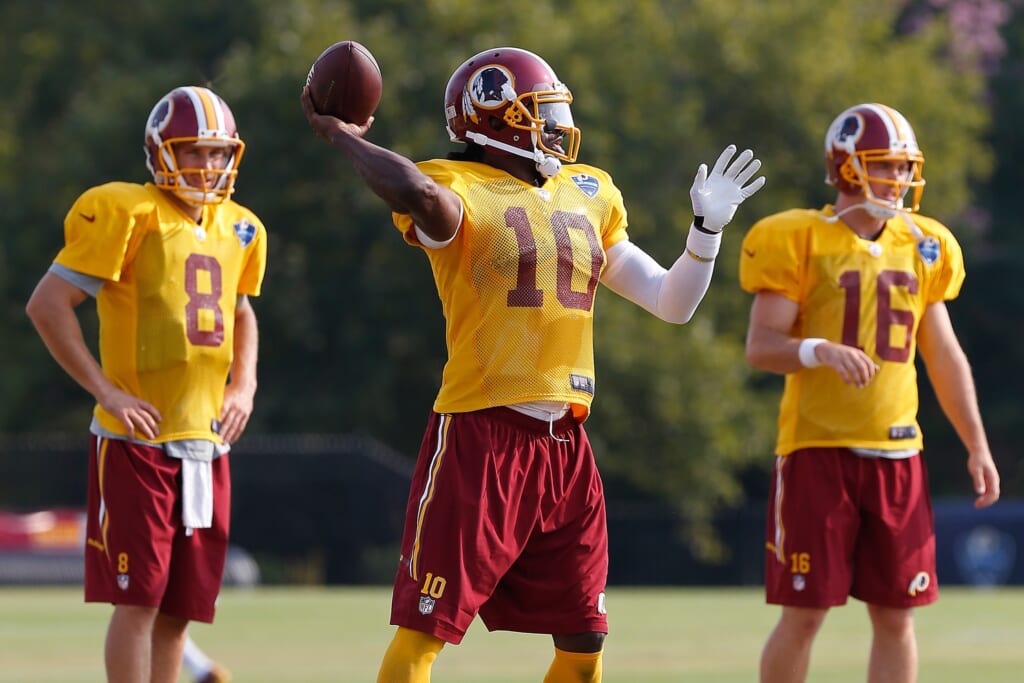 Robert Griffin III has supposedly turned the corner and is ready establish himself as Washington’s starting quarterback, but skeptics remain—and for good reason. Kirk Cousins and Colt McCoy both have experience in the offense and have had some minor success, so RG3 must truly earn his spot as the top dog. Washington coach Jay Gruden expects Griffin to play at least a quarter.

The Browns aren’t rushing to hand 2014 first-round pick Johnny Manziel the keys to the offense, but the 22-year-old needs only overtake Josh McCown on the depth chart. Head coach Mike Pettine and left tackle Joe Thomas have praised Manziel’s progress but expressed full support for McCown, so now it’s time to see which quarterback will perform better. In order to earn the starting gig, Manziel likely needs to outplay McCown throughout the preseason. Fortunately, Washington provides Manziel a favorable matchup for his 2015 debut.

Though Joseph Randle is bound for the starting running back position in Dallas, Darren McFadden and Lance Dunbar are threats to steal some carries. Injuries to the latter two have given Randle an opportunity to shine, and the third-year player needs to continue pulling away in the competition on Thursday. Otherwise, DMC and Dunbar will have another chance to demand a few carries on a regular basis.

San Diego selected Melvin Gordon in the first round, and the Wisconsin product will likely handle a strong majority of carries during the regular season. However, he’s not a reliable receiver, while Danny Woodhead is exactly that. But are the Chargers going to allow Woodhead—who sustained a season-ending injury last year—to be more than a solid third-down back?