Player of the Year Oscar Tshiebwe returns to Kentucky 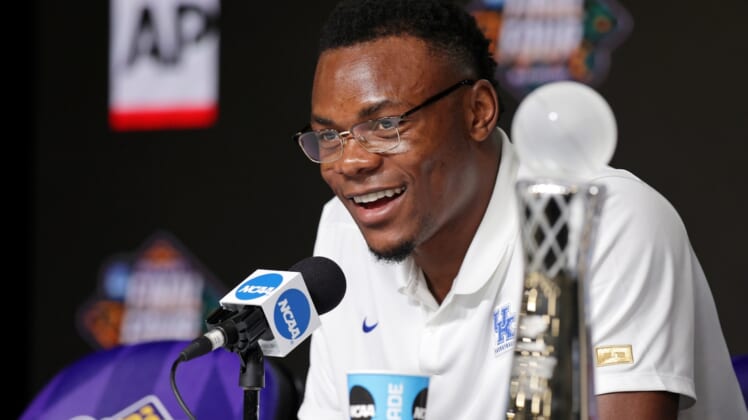 Oscar Tshiebwe, who won all of college basketball’s major National Player of the Year awards, is returning to Kentucky next season.

Tshiebwe made the announcement on Wednesday in his first comments about his status since the Wildcats lost in the first round of the NCAA Tournament to No. 15 seed Saint Peter’s.

Since 1977, only two other underclassmen to sweep the awards have returned to their college teams the following season: Virginia’s Ralph Sampson in 1982 and North Carolina’s Tyler Hansbrough in 2008.

Tshiebwe, a 6-foot-9 junior forward, made his announcement on ESPN’s SportsCenter and said he is returning to school, in part, to improve his draft position. He also has a sour taste from Kentucky’s early exit from March Madness.

Tshiebwe was projected as a second-round pick in some mock drafts.

Because he is from the Democratic Republic of the Congo, Tshiebwe hasn’t been eligible to capitalize on NIL endorsement deals. But rules for foreign students are expected to change before the start of next season, so he could work on his game and delay a move to the NBA that would be fueled by finances.

“I want to be a lottery pick, but I’m not there yet,” Tshiebwe said on ESPN.

Tshiebwe led the nation in rebounding (15.1 per game) and averaged 17.4 points in 34 starts. He also led college basketball with 515 total rebounds and shot 60.6 percent from the field for the Wildcats.

He joined Anthony Davis (2011-12) as the only AP Player of the Year winners in Kentucky’s illustrious history.