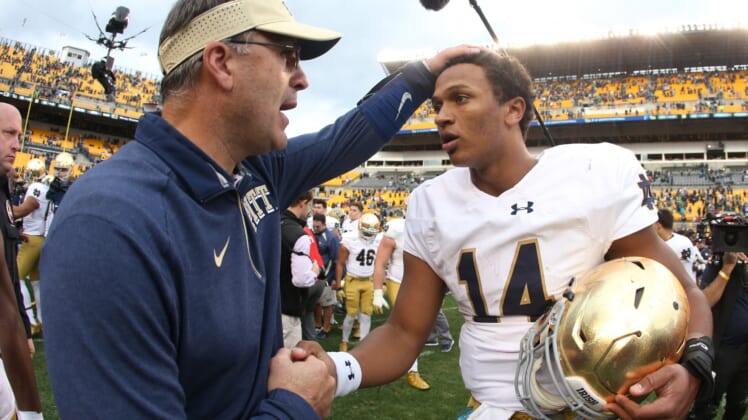 The Pittsburgh Steelers are taking on the Cleveland Browns Thursday night, which is the same night the Pittsburgh Panthers are playing against North Carolina. Pitt head coach Pat Narduzzi is not happy about having to share the national stage.

In particular, he’s upset about how this game could split loyalties as fans have to choose which game to watch.

“They have to start to look and say `What make sense for the city of Pittsburgh?’ and that obviously wasn’t done,” Narduzzi said Monday during his weekly news conference, per triblive.com. “I really don’t think about it much — until this week, I thought about it.”

Narduzzi also thinks this is bad for the ACC as a whole, which will be competing against the mighty NFL.

“What are we doing here?” he wondered. “You look at it and say it’s not good for the ACC playing on the same night as an NFL franchise in your same city. It’d be different if the Cowboys were playing the Seattle Seahawks or the New England Patriots. Same city, two hours away. Our schedule came out before theirs (January, compared to April).”

Both games are taking place around the same time, so naturally it’s safe to assume that many fans in Pittsburgh will be more interested in watching their favorite NFL team, which has playoff aspirations, instead of the Panthers.

Thankfully, fans attending the Pitt game at Heinz Field will be able to also keep track of their beloved Steelers on televisions around the stadium.