Pirates try again for first win of season vs. Braves 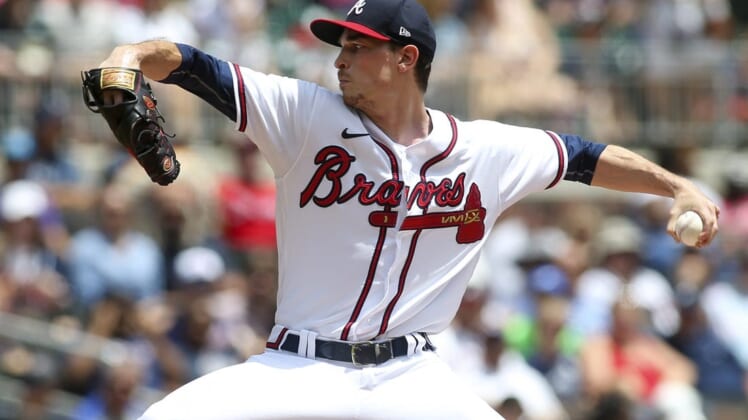 The visiting Atlanta Braves didn’t need their potent offense on Monday as they opened their series against the Pittsburgh Pirates with a win. Maybe they won’t need all that much of it Tuesday either.

After all, the 2-1 win on Monday made the Braves 5-0 this season against the Pirates after a four-game sweep at home in June. Pittsburgh has managed 11 runs and has struck out 62 times in the five games.

Atlanta manager Brian Snitker will take wins regardless of what formula his team follows.

“It’s never the way you draw it up,” Snitker said. “There’s always going to be a stumbling block or something in a game, things like that.”

A victory on Tuesday would match an Atlanta season high with eight road wins in a row and would clinch a fifth straight series win.

Pittsburgh has lost three in row and nine of 11.

One bright spot for the Pirates on Monday came off the bat of Oneil Cruz. The rookie shortstop hit his 10th homer, a seemingly mile-high shot to right for the team’s lone run, after entering the series in a 6-for-47 (.128) slump over 13 games.

“(The homer) shows results of the hard work that I’m putting in,” Cruz said through an interpreter. “My mindset is always to get the barrel out quick. Every time I get up there, I’m trying to go up there with a plan.”

Pittsburgh manager Derek Shelton said inconsistency is to be expected.

“The big thing is, he’s still a rookie. And he’s still a 6-foot-7 rookie playing shortstop, which no one has ever done,” Shelton said of Cruz. “So there is going to be a lot of those growing pains.”

Brubaker is coming off one of the best performances by a Pirates starter this year. He got a win on Thursday against the Boston Red Sox when he pitched seven shutout innings of two-hit ball, striking out seven without issuing a walk.

The 8-2 win was important because it snapped Pittsburgh’s six-game losing streak. Brubaker might have gone longer if not for a blister on his right hand that festered but was not severe enough to keep him from the Tuesday start.

“Just the idea of … attacking the zone,” Brubaker said. “It’s really just pace and it’s momentum, just with your body, how your body is rolling out there on the mound. It’s a lot easier when you get it from pitch one to continue it throughout the game.”

Against Atlanta, Brubaker has lost both of his career starts while producing a 7.30 ERA. That includes a loss on June 9, when he gave up three runs and six hits in seven innings.

Fried is coming off a win on Thursday against the New York Mets, when he gave up two runs and four hits in seven innings with six strikeouts and no walks.

In his career, Fried is 2-1 with a 5.32 ERA in four career starts vs. the Pirates. That includes a 3-1 win on June 9, when he yielded one run and eight hits in six innings with eight strikeouts and no walks.