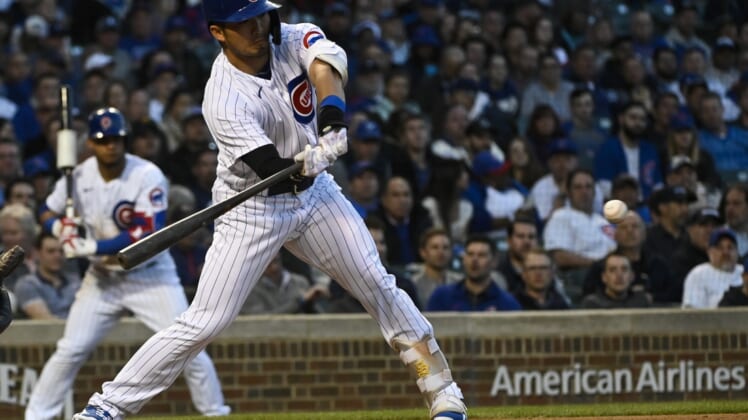 Five Pittsburgh relievers held the Chicago Cubs to one hit over six scoreless innings as the visiting Pirates snapped a three-game slide with 4-3 victory on Thursday.

Pirates cleanup hitter Yoshi Tsutsugo delivered a go-ahead, two-run double in the fifth inning, the decisive hit in the opener of a four-game series.

Pittsburgh was down 3-2 with the bases loaded and two outs when Tsutugo rapped an opposite-field double to left field off Chicago reliever Ethan Roberts (0-1), giving Pittsburgh its first lead in four contests after being swept in a three-game set at Milwaukee this week.

Daniel Vogelbach clubbed a two-run homer and Ben Gamel had three hits for the Pirates, who improved to 2-5 on the road.

Crowe fanned five in 2 1/3 innings. Stratton handled the ninth for his first save.

Chicago managed just Willson Contreras’ fifth-inning single and struck out 10 times while walking once against the Pirates bullpen.

The Cubs, who have lost three in a row, all at home, took advantage of an erratic Wilson, who issued three first-inning walks, including one to Frank Schwindel with the bases loaded. Jonathan Villar followed with a sacrifice fly to give the hosts a 2-0 lead.

Wilson threw 34 of his 60 pitches in the first inning, and he gave up three hits and four walks on the night. He yielded an RBI groundout to Seiya Suzuki in the second but got some support with Vogelbach’s shot into the right-center-field bleachers in the third to get Pittsburgh within a run.

Suzuki went 0-for-4, ending his franchise-record streak of reaching base in 12 straight games to start his career.

Schwindel finished 0-for-4 to snap his nine-game hitting streak.