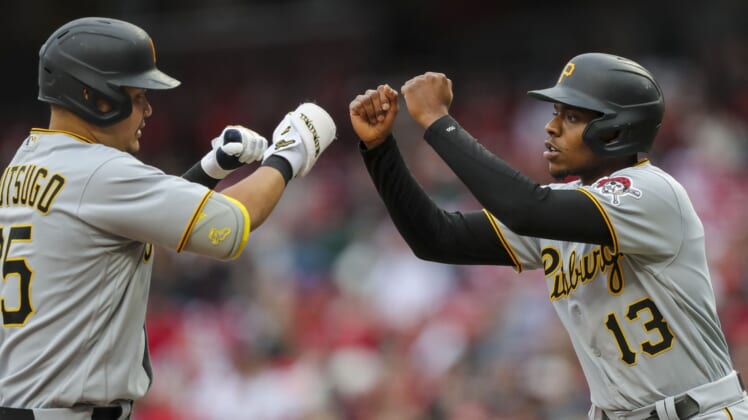 The visiting Pittsburgh Pirates clubbed four homers to overpower the Cincinnati Reds, 8-5, Saturday night to earn a split of the scheduled day-night doubleheader.

It was the second doubleheader split in the last four days for the Pirates, who had an extra off day on Friday due to a rainout in Cincinnati.

The Reds, who have lost 21 of 23, used a seven-run explosion in the bottom of the eighth to break a 2-2 tie and beat the Pirates, 9-2, in the first game, snapping a nine-game skid. Tyler Stephenson had three hits, including two doubles, and a career-high four RBIs to pace the Reds.

In the nightcap, the Pirates jumped out to a fast start in the first inning thanks to the long ball. Bryan Reynolds homered off Cincinnati’s last-minute opener Dauri Moreta (0-1) for a 1-0 lead. After a double by Ke’Bryan Hayes, Cincinnati’s only left-handed pitcher Phillip Diehl entered the game and surrendered back-to-back homers to Yoshi Tsutsugo and Diego Castillo to give the Pirates a 4-0 lead.

The suddenly resurgent Cincinnati offense came back with two runs thanks to an RBI single from Mike Moustakas and a Colin Moran sacrifice fly. Right fielder Jack Suwinski robbed Moran at the wall of a two-run homer on the sacrifice fly.

Ben Gamel launched Pittsburgh’s fourth homer, a long two-run homer to the back deck of right field off Robert Dugger to increase Pittsburgh’s lead to 7-2 in the fourth.

The Reds again responded against Pirates starter Mitch Keller, as Drury drilled his team-leading fifth homer to the seats in right with two runners on to cut the Pittsburgh lead back to two, 7-5. Drury drove in four runs in the loss and had five hits in the two games.

After a leadoff ground-rule double by Moustakas in the fifth, Keller was pulled by manager Derek Shelton two outs shy of qualifying for a win. Keller allowed five runs on six hits, striking out three and walking three in 4 1/3 innings.

Heath Hembree (2-0) recorded the final two outs of the fifth against his former team for his second win in as many decisions. David Bednar struck out the side in a perfect ninth for his fourth save in as many chances this season.

The Pirates added to their lead in the seventh on Suwinski’s two-out double that scored Daniel Vogelbach. The Reds put their first two batters on in the seventh but couldn’t score as Kyle Farmer grounded out to end the inning, extending his hitless streak to 0-for-28.