The struggling Phoenix Suns are expected to be active ahead of the Feb. 9 NBA trade deadline. They head into Tuesday’s game against the Charlotte Hornets with a pedestrian 24-24 record.

One of the major backdrops in the desert thus far this season has been injuries. Chris Paul has missed 21 games to injury. Fellow star Devin Booker has missed 19 games himself.

It has led to reports that Suns general manager James Jones is willing to give up at least a first-round pick while taking on a big contract to add a starter-caliber player to the mix.

There’s a lot of moving parts here. Chris Paul is 37 years old and has been plagued by injuries in the recent past. However, he’s also playing under a four-year, $120 million contract that runs through the 2024-25 season. Unless Phoenix adds more capital to move Paul in a trade, he would likely be relegated to bench duties in the desert.

Outside of Paul, Phoenix does have assets to move in order to pull off a significant trade ahead of the deadline.

Jae Crowder has long been on the trade block and is in the midst of a contract year. He’s remained away from the Suns throughout the season in hopes of landing elswhere. Crowder’s $10.1 million cap figure could loom large in trade talks with other teams. Landry Shamet ($9.5 million) and Dario Saric ($9.2 million) could also be used as cap fillers to make a deal work.

This is nearly $29 million without getting into actual assets that would be headed to another team.

As Stein noted, Terry Rozier becomes a real option for the Phoenix Suns. It’s interesting in that they are set to take on the veteran and his struggling Charlotte Hornets on Tuesday. That will give Jones and Co. a first-hand view of the point guard.

Rozier’s shooting numbers are down clear across the board from previous seasons. But he’s still in his prime at 28 years old and could be seen as a long-term solution in Phoenix. Rozier is currently playing under a four-year, $96.26 million contract. He’s counting $21.49 million against the cap in 2022-23, meaning the three players mentioned above could help the salaries work.

If Phoenix is willing to offer up a future unprotected first-round pick and more assets, it could be enough for Charlotte to pull the trigger.

As for VanVleet, recent reports suggest that Toronto is not going to move off the impending free agent unless it acquires multiple future unprotected first-round picks. Whether that’s something the Suns’ brass would be willing to do remains to be seen.

What we do know is that Phoenix is looking to target VanVleet in free agency. Meanwhile, the Raptors have long had interest in enigmatic Suns center Deandre Ayton. 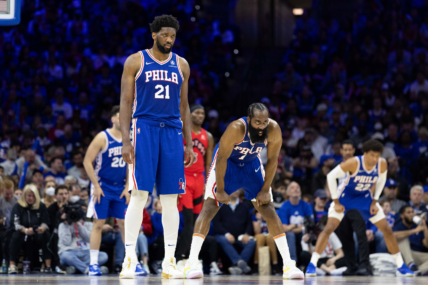 The former No. 1 pick returned to Phoenix this past offseason after the team matched the Indiana Pacers’ restricted free-agent offer for the center. Things don’t seem to be going swimmingly on this front.

It might be pure conjecture, but a broader Phoenix Suns trade with Toronto consisting of Ayton heading up north and VanVleet finding himself in Arizona could make sense. The salaries would nearly align with a veteran contract following VanVleet to Phoenix and more draft capital heading to Toronto.