With Matt and Justin Ishbia now the top decision-makers in the Phoenix Suns organization, the team has reportedly changed its approach to making trades, and it could allow them to swing some big moves soon.

The Suns have found out this season that, despite having stars like Chris Paul and Deandre Ayton on the roster, if Devin Booker is not on the court each night they don’t have a very good chance of winning games.

That has been the situation over the last month as the team has plummeted down the NBA standings, and our own NBA power rankings, with Booker sidelined due to a groin injury. They are 2-9 in their last 11 and are barely holding on to the final spot in the NBA Play-in Tournament. It has made it very apparent that this team needs to make some upgrades to the roster, even when their superstar is back healthy.

However, the Phoenix Suns organization hasn’t built a reputation of wheeling and dealing on the trade market and making bold acquistions. That reportedly has changed with new owners Matt and Justin Ishbia running the show.

On Thursday, The Athletic’s NBA insider Shams Charania revealed the new approach the Suns are taking to potential trades, and how it could open the door to some big moves in the future.

“The Suns have actually informed teams they’re willing to move a first-round pick and potentially take on salary long-term for good players and winning acquisitions. So for me, you’re starting to see the influence of the Matt and Justin Ishbia regime.”

Unlike some teams, the Phoenix Suns have all their first-round picks going forward and a strong core to add to. With that in mind, let’s take a look at three players the organization could target ahead of the trade deadline.

One position the Phoenix Suns could certainly use an upgrade is at power forward. Wizards star Kyle Kuzma is the best at the position on the market and is in the midst of a career year. While the impending free agent would only be a rental, he would add athleticism and high-level scoring to the team’s frontcourt, and bolster the roster for a serious playoff run. 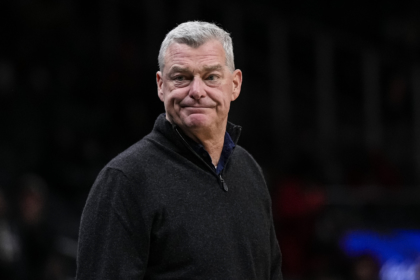 The Suns need scoring off the bench. Fifteen-year veteran Eric Gordon would be an easy fix for that issue.

The Houston Rockets are in a complete rebuild and seem to be in tank mode again this season. Gordon desperately wants out, and his addition could mean receiving a motivated scorer excited to be back on a winning team and playing in playoff games in the spring. The downside is he is injury-prone and is signed for one more season.

Bojan Bogdanovic could be an interesting middle ground between the benefits in deals for Kuzma and Gordon. The 10-year veteran is having a fantastic season in Detroit and is one of the most sought-after players on the market. He would bring the Phoenix Suns the reliable extra scoring they are in need of and likely do so by improving the bench.

However, he too is having a career year just in time to cash in during the summer in NBA free agency. Meaning the Suns must be careful in what they are willing to part with for his services.