If you are a Los Angeles Lakers fan hoping the team can swing a big trade that makes a major impact on their season, you may want to have a more conservative outlook on roster changes ahead of the NBA trade deadline.

Despite changing their head coach and making the bold move to bench former NBA MVP Russell Westbrook, the Lakers have still struggled to build winning momentum in the 2022-2023 season. And the team’s 21-25 record is third worst in the Western Conference heading into their matchup on Sunday against the Portland Trail Blazers.

However, even though they have not played as well as hoped, and a foot injury to top player Anthony Davis has hampered them over the last month, they are only a game out of the final spot for the NBA Play-In Tournament, and two games out of avoiding the tourney altogether.

It all means that there’s hope among the fanbase that the Los Angeles Lakers could make a notable trade ahead of the Feb. 9 NBA deadline. And with Davis back — which could happen next week — maybe LA could become a formidable group in the Western Conference playoffs.

Unfortunately, the word around the league points to the organization making only small moves at best in the next couple of weeks.

On Friday, ESPN NBA insider Adrian Wojnarowski gave an update on the outlook for the Lakers heading toward Feb. 9, and while they will make an effort to be active in the trade market, the prognosis is not good for change in La La Land.

“I think for the Lakers, a player like Bojan Bogdanovic in Detroit — who a lot of teams have interest in — the price is significant for players like that. There’s just not a lot of sellers yet in the marketplace. Multiple draft picks [is the asking price] for a player like Bogdanovic right now, and what teams have to ask themselves is, for an incremental improvement, how much are we willing to give up? I don’t think there’s any big deals for the Lakers out there, but I do think they’re gonna be active around the edges.” 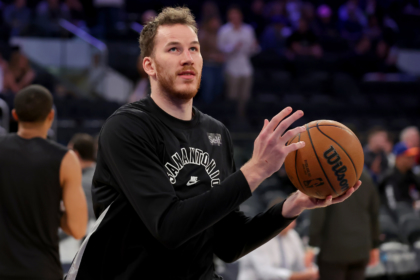 The Los Angeles Lakers are hampered by a lack of flexibility in their payroll, few players that have a high value around the league, and a dearth of worthwhile picks in upcoming drafts. The team does not have a first-round draft pick until 2025.