Bookmark. Save. Do your thing. We will be providing constant updates on this page as it relates to the biggest NBA trade rumors with the 2022-23 season now in full bloom and the trade deadline set for Feb. 9.

Michael Scotto of HoopsHype reports that a deal would involve All-Star forward Pascal Siakam heading to Brooklyn for a package surrounding Ben Simmons and several first-round picks. Scotto also notes that improved Nets center Nic Claxton has been a part of trade discussions between the two sides.

This leads us to question why Toronto would even engage in trade talks surrounding Simmons. It might simply be to make the salaries work with the Raptors acquiring even more assets to take on Simmons’ bloated five-year, $177.2 million contract.

Miami is looking to move off struggling veteran Kyle Lowry ahead of the trade deadline. The Miami Herald is reporting that Lowry could be moved if front office head Pat Riley believes a trade could help them moving forward on the season.

All of this comes amid suggestions that Miami is interested in making a play for Kevin Durant should he be made available with the NBA trade deadline approaching. Unfortunately for the Heat, there’s no sign that KD will be made available by Brooklyn. The team also lacks necessary assets to pull off a blockbuster deal. Lowry, 36, is averaging 12.0 points, 4.3 rebounds and 5.3 assists on a mere 40% shooting from the field this season. 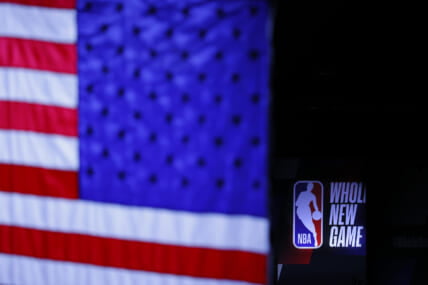 The blockbuster deal that sent Kyrie Irving from the Brooklyn Nets to Dallas will have wide-ranging ramifications. The Mavericks saw their title odds shorten big time. Meanwhile, Brooklyn will now likely make another big move ahead of the NBA trade deadline (more on that below). 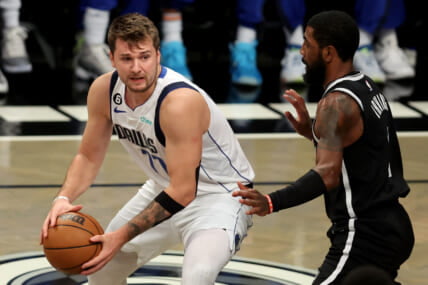 But there’s going to be broader ramifications. Someone close to Irving trade talks leaked that the Phoenix Suns had offered up Chris Paul to Brooklyn. It will be interesting to see how Paul handles that tidbit. While he’s the ultimate professional, the future Hall of Famer is also human. Said leaks also included the Lakers offering up Russell Westbrook. Already an embattled figure in Southern California, we’re intrigued to see how he reacts.

New York and Utah have had conversations surrounding a blockbuster deal that would send Malik Beasley and Jarred Vanderbilt to the Big Apple. We mentioned that scenario a bit below.

A more-recent report from Zach Braziller of SNY indicates that the Knicks could now move at least three players ahead of the NBA trade deadline. That list consists of Cam Reddish, Evan Fournier and Derrick Rose. In particular, the Knicks’ insider said that Reddish “is going to get traded.”

At 29-26 following Sunday’s big win over Philadelphia, the Knicks will want to expand any deal to bring in piece or two that can contribute down the stretch. 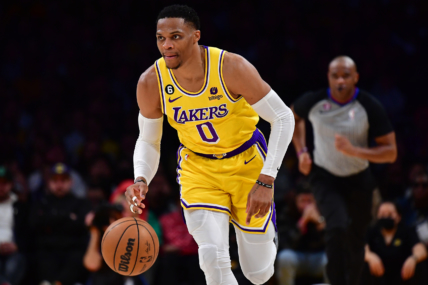 Also Read:
10 stars possibly on the move at NBA trade deadline, including Anunoby and Westbrook

ESPN’s Adrian Wojnarowski reported during Sunday night’s New York Knicks and Philadelphia 76ers game that Brooklyn wants Durant to be a part of its long-term future. That’s all fine and dandy. However, we’re talking about an enigmatic player who requested a trade last offseason before ultimately pulling it. Will Durant now follow Irving in requesting a trade? Time will tell on that front. 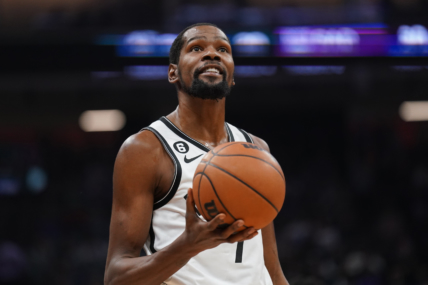 If so, the Phoenix Suns already have feelers out for the two-time NBA Finals MVP. Phoenix was linked to Durant in trade talks this past summer. It has the assets to pull off a trade of this ilk. If KD does indeed request a trade, Phoenix won’t be the only “contender” interested in him. That’s for sure.

Phoenix Suns to be active ahead of NBA trade deadline

This goes to our two aforementioned reports. Phoenix’ inability to land Irving in a trade surrounding Chris Paul doesn’t mean the end of its involvement in NBA trade rumors.

Shams Charania of The Athletic notes that Phoenix is “expected to be incredibly” active before Thursday’s deadline. That could include flipping Paul and assets for a longer-term option at point guard. The Suns had previously been linked to Toronto Raptors star Fred Van-Vleet. It’s certainly something to watch over the next few days. 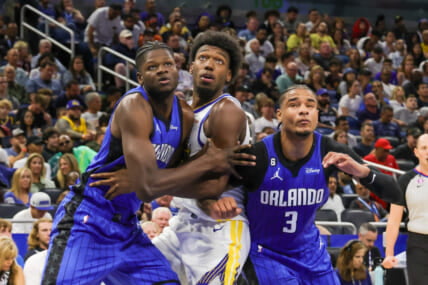 Brooklyn added a starting point guard in Spencer Dinwiddie and a nice rotation piece, Dorian Finney-Smith, in the Irving blockbuster. We envision both remaining in the Big Apple past Thursday’s NBA trade deadline.

However, Nets general manager Sean Marks is going to make another big trade ahead of said deadline. Brooklyn picked up an unprotected future first-round pick from Dallas in the Irving blockbuster. It has another future first-rounder stemming from the James Harden trade with Philadelphia last February. Look for the Nets to be in on pretty much every big name over the next few days.

On Saturday, Hoops Hype NBA insider Michael Scotto reported that the New York Knicks and Utah Jazz have had conversations about a blockbuster deal that would send 2020 first-round pick Obi Toppin and Evan Fournier’s hefty contract to Utah for Jarred Vanderbilt and Malik Beasley.

The move is contingent on the Knicks adding one of their many first-round picks in the potential deal. However, despite the pair of Jazz and Timberwolves veterans having fans in the organization, New York has been hesitant to add a high-value pick to the deal.

Memphis Grizzlies could make a play for Toronto Raptors star

Flush with an excess of picks and two All-Stars in Ja Morant and Jaren Jackson Jr., there’s no reason to believe that the contending Grizzlies won’t be active ahead of next week’s deadline. It’s led to NBA trade rumors linking them to Toronto Raptors wing O.G. Anunoby.

According to Michael Scotto of HoopsHype, NBA executives believe that Memphis could be preparing to trade for Anunoby. The price could be three first-round picks and change. At just 25, Anunoby is averaging 17.0 points and 5.5 rebounds on 45% shooting from the field since the start of last season. He’s also an elite-level defender.

Four teams in on Zach LaVine

“The Lakers, Heat, Knicks and Mavericks have consistently been mentioned by league personnel as holding motivations to land LaVine if the time does arrive,” Yahoo! Sports Jake Fischer on Zach LaVine trade rumors.

At this point, it’s highly unlikely that the Bulls will put LaVine on the market ahead of the deadline. Despite their struggles, they have been wanting to build around LaVine and DeMar DeRozan. Averaging 23.7 points, 4.8 rebounds and 4.2 assists this season, LaVine would cost a whole heck of a lot. That pretty much eliminates three of the four teams mentioned above outside of the New York Knicks. With that said, this is one of the biggest NBA trade rumors to watch over the next few days.

The Utah Jazz are performing better than expected after trading away Donovan Mitchell and Rudy Gobert, but they’re not afraid to continue making moves. According to HoopsHype’s Michael Scotto, the Jazz may be willing to part with power forward Jarred Vanderbilt.

Vanderbilt, who averages 8.5 points and 7.8 rebounds in just 24 minutes per game, is under contract for the 2023-24 season for a mere $4.7 million and is still just 23 years old. Shams Charania of The Athletic is reporting that the Portland Trail Blazers are frontrunners to land Vanderbilt. At this rate, it will likely cost a first-round pick and change. 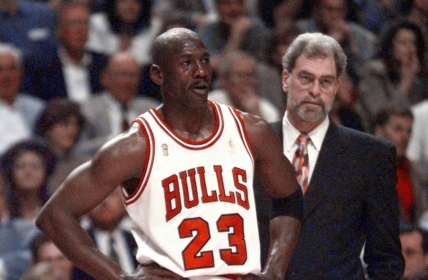 According to Keith Pompey of The Philadelphia Inquirer, Golden State is interested in acquiring two-time All-NBA Defensive Team performer Matisse Thybulle from Philadephia. The idea would be for Steve Kerr’s squad to get a defensive stopper late in game and off the bench.

The former Washington standout is averaging a mere 2.7 points on 44% shooting in 12.1 minutes of action this season. In no way does this mean Thybulle can’t be a valuable contributor to another team. He earned All-Defensive Team honors each of the past two seasons.

As the Feb. 9 NBA trade deadline draws closer, one name to keep an eye on is San Antonio Spurs center Jakob Poeltl. According to Shams Charania, Poeltl has attracted attention from teams such as the Toronto Raptors and Boston Celtics thus far. He’s in the final year of a contract paying him $9.3 million this season. Now 27, Poeltl offers low-post scoring, while also being an above-average rebounder and rim protector.

While Poeltl has enjoyed his time in San Antonio, the Austrian native wants to win, and the Spurs just aren’t competitive at this point. It could come down to the Spurs not wanting to risk losing him as a free agent, opting to try and get some value for the big man now.

A team that’s greatly struggled due to injuries and off-court trouble, the Charlotte Hornets aren’t headed anywhere this season and could soon begin a firesale. If so, players like Terry Rozier, Mason Plumlee, Jalen McDaniels, and Kelly Oubre Jr. could all be up for grabs, according to Shams Charania of The Athletic.

Rozier is the biggest name of the group, but he still has three years and $97 million remaining on his contract, which could deter some potential buyers. Either way, the Hornets are expected to be trade deadline sellers, meaning several players could receive a ticket out of town.

According to Jake Fischer of Yahoo Sports, the Cleveland Cavaliers, Dallas Mavericks, Los Angeles Lakers, and Phoenix Suns are just four teams who have looked into landing the rangy scorer. The Pistons are said to be looking for a first-round pick, plus a young player with potential.

Latest on Jae Crowder trade from the Phoenix Suns

This veteran forward has not played a single game during the 2022-23 season after requesting trade from Phoenix during the summer. Crowder is not happy about his role with the Suns and wants out of dodge.

Unfortunately for the veteran, nothing has come to fruition on this end. It was noted back in November that at least eight teams were interested in him. Prior to that, the Milwaukee Bucks were seen as a potential landing spot. Meanwhile, NBA insider Marc Stein reported during the fall that Washington offered up Rui Hachimura in a deal for Crowder. It was ultimately turned down with the former now a member of the Los Angeles Lakers.