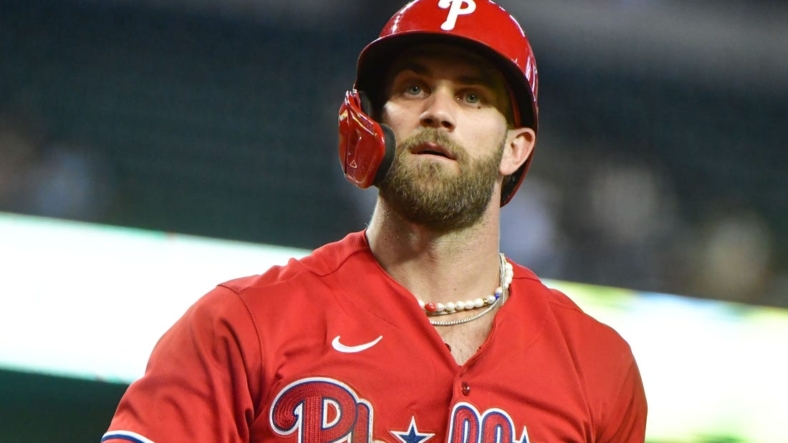 Bryce Harper hopes to get back in the swing of things at a place that could have become home when the Philadelphia Phillies visit the tail-spinning San Francisco Giants for the opener of a three-game series Friday night.

The Phillies (73-58) needed an 18-2 shellacking of the Arizona Diamondbacks on Wednesday to snap a three-game losing streak. They retained a half-game lead over the San Diego Padres in their duel for the second and third wild-card playoff spots in the National League.

San Diego’s surge came at the expense of the Giants (61-68), who began the week 7 1/2 games behind in the wild-card race. But after suffering a three-game home sweep at the hands of their NL West rival, the Giants now find themselves 10 1/2 back of the Padres (73-59) and 11 back of the Phillies with just 33 to play.

“We’re not winning baseball games, and that’s all that matters.”

One of the criticisms of the Giants’ fall from last year’s best-in-baseball regular-season record is a lack of star power in the wake of Buster Posey’s retirement.

Harper admitted the Giants were a serious consideration before he signed a 13-year, $330 million deal with the Phillies in March of 2019. He explained at the time that he thought the window had already begun to close on a franchise that won three championships between 2010-14.

Harper, who turns 29 next month, has played six games since returning from an elbow injury that kept him out two months. After going 3-for-10 without an extra-base hit in his first three games back against the Pittsburgh Pirates, he flashed his old form with five hits, including two doubles, in 11 at-bats over three games at Arizona earlier this week.

The 34-year-old has faced the Phillies just twice in his career, both starts, going 0-1 with a 3.75 ERA. He did not face the Phillies in an earlier series in Philadelphia.

Gibson got a no-decision in a 5-4 home loss to the Giants on May 30 after allowing two runs and three hits in six innings.