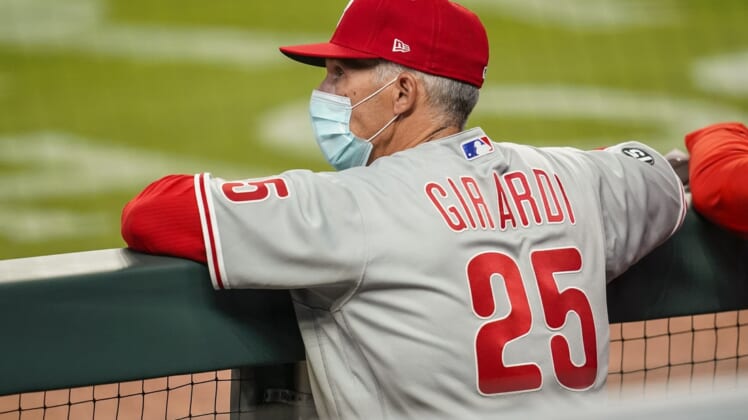 Odubel Herrera hit a three-run homer to highlight a six-run first inning and lift the visiting Philadelphia Phillies to a 12-2 win over the Atlanta Braves on Friday.

Herrera was 2-for-4 with a walk and four RBIs to help the Phillies post a season-high 16 hits and extend their winning streak to five games.

Philadelphia benefited from the return of second baseman Jean Segura and right fielder Bryce Harper. Segura had been out since April 21 with a strained right quad and went 4-for-5 with two RBIs and two runs scored. Harper had missed four games with a sore left wrist and returned to go 2-for-5 with a walk and two runs scored.

The winning pitcher was Zach Eflin (2-1), who worked 6 2/3 innings and left with the bases empty after throwing 99 pitches. He allowed two runs on five hits, one walk and matched his season high with eight strikeouts.

The Phillies ambushed Atlanta starter Charlie Morton (2-2), who did not escape the first inning. An RBI single from Alec Bohm and a two-run single from Segura preceded Herrera’s home run, his first, and produced six runs.

Morton was tagged for six runs on four hits, two walks and one strikeout in two-thirds of an inning.

The Braves got a run in the second inning on Dansby Swanson’s third homer, but the Phillies made it 7-1 on Andrew McCutchen’s fielder’s choice with the bases loaded.

Atlanta’s Ronald Acuna Jr. drove in his 22nd run with a single in the fifth, only to have Philadelphia respond with an RBI single from Bohm in the sixth and a run-scoring single from McCutchen in the seventh for a 9-2 lead.

Philadelphia scored three more in the eighth, a two-run homer from J.T. Realmuto, who was 3-for-5, and a run-scoring fielder’s choice by Herrera.