The Philadelphia 76ers are hosting the Washington Wizards in Game 1 of their first-round NBA Playoff series at Wells Fargo Center Sunday afternoon.

An NBA environment that has been defined by empty venues over the past calendar year due to the COVID-19 pandemic has now been replaced with fans slowly making their way back into arenas.

That was no different ahead of Philadelphia’s playoff opener against Russell Westbrook, Bradley Beal and the Wizards. It was just announced that the 76ers would increase capacity to 50% for the playoffs.

Boy, did it sound like there were more than 10,000-plus on hand for this game. Check out the pregame introductions from Philly. It really did seem like a pre-pandemic playoff game.

The Philadelphia 76ers are among those who will likely have the largest number of fans attending games during these NBA Playoffs. At least before Game 1, this showed.

MVP candidate Joel Embiid and his Sixers head into the postseason as the top overall seed in the Eastern Conference. They are taking on a Wizards squad that had to go through the play-in tournament for the eighth seed and a spot in the playoffs. 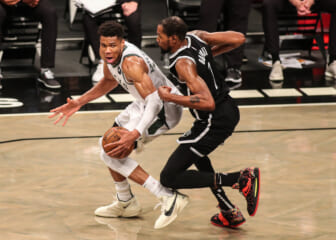 As for the environments we’re going to see during the playoffs, it really is going to be dependent on local and state policies.

The New York Knicks just announced that 15,000 fans will be on hand at Madison Square Garden for the first two games of their series against the Atlanta Hawks. Meanwhile, the Wizards will only welcome about 2,100 fans when they host Philadelphia for Game 3 of their series later in the week.