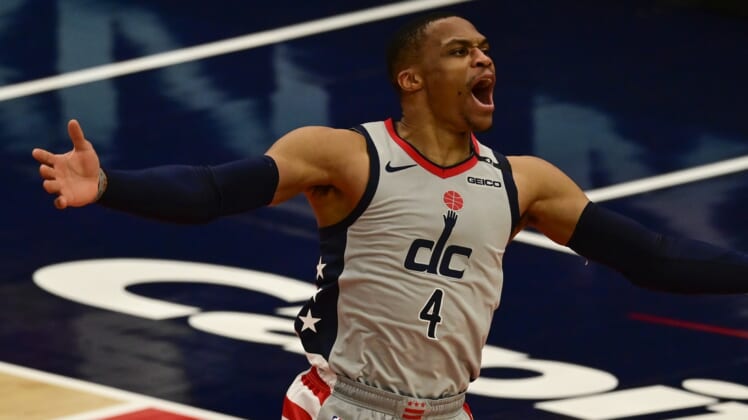 Russell Westbrook added 18 points, 15 assists and eight rebounds as Washington earned the No. 8 seed and captured its first postseason berth since the 2017-18 season. The Wizards will face the top-seeded 76ers in the first round, beginning Sunday in Philadelphia.

The setback eliminated the Pacers and ended the franchise’s streak of five straight playoff appearances.

Beal made four 3-pointers and also had five rebounds and four assists while playing 28 minutes. He sat out the final 15-plus minutes of the lopsided contest to rest his strained left hamstring.

The Wizards went 3-0 in the regular season against the Pacers while averaging 139.7 points.

Washington was clicking again Thursday, shooting 58.1 percent from the field, including 14 of 28 from 3-point range. The Wizards held a 52-40 rebounding edge.

Doug McDermott and Kelan Martin added 13 points apiece for the Pacers, who shot 41 percent from the field and were 15 of 41 (36.6 percent) from behind the arc. Caris LeVert again sat out due to health and safety protocols.

The score was tied at 34 early in the second quarter when the Wizards broke it open with 16 consecutive points. Robin Lopez scored six points during the burst, including the inside hoop that capped it with 6:49 left in the half.

Washington led 66-52 at the break. The lead was 17 after Brogdon made two free throws for Indiana with 6:58 remaining in the third quarter before the Wizards blitzed the Pacers 17-4 over the next 2:51 to assure they were headed to the playoffs.

Beal converted a three-point play and drained a 3-pointer in a span of 28 seconds to push the lead to 25. He drilled another trey to end the spurt and give Washington a 98-68 advantage with 4:07 left in the period.

The lead reached 32 later in the third before the Wizards took a 114-83 lead into the final stanza. Washington’s biggest lead was 38.