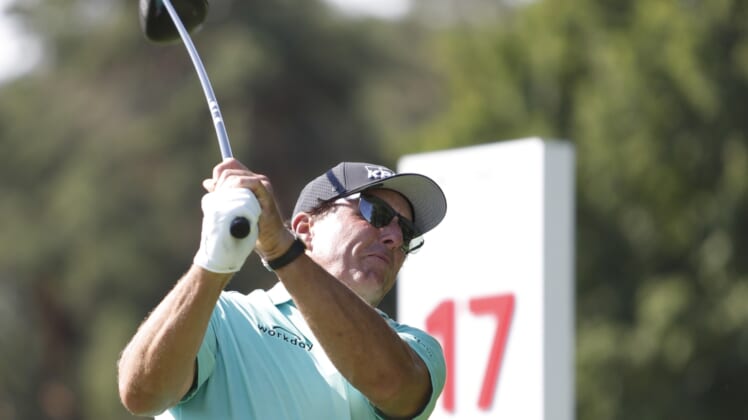 Phil Mickelson is playing at Detroit Golf Club in the Rocket Mortgage Classic, a relatively new PGA Tour stop, for the first time. He says it also will be his last.

After the Detroit News reported a story about Mickelson being cheated out of a hefty gambling payout by a Detroit-based bookie more than 20 years ago, the six-time major champion said he will not return to Detroit in the future.

A local business journal editor asked on Twitter if Mickelson was “done rage-tweeting at @robertsnellnews for doing his job.”

“I haven’t tweeted anything yet. I’ve only responded to other’s tweets,” Mickelson replied. “You and Rob do what you need to do (report something from over 20 years ago) and I’ll do what I need to (let everyone know why I won’t be back).”

Later, a reporter from a rival newspaper said Mickelson confirmed to him he was serious about not returning to the Rocket Mortgage Classic.

The News ran a story about Mickelson’s relationship with a now-deceased bookie named ‘Dandy’ Don DeSeranno, who had ties to organized crime in Detroit. Mickelson was not accused of anything illegal, but the report highlighted that DeSeranno once was unable to pay Mickelson gambling winnings worth $500,000.

Mickelson’s camp took issue with the newsworthiness of the report and the decision to peg it to his arrival in town to play a Tour event. His attorney told ESPN before the start of the tournament that the story was only designed to “embarrass” the six-time major champion.

“He didn’t say anything (in the story) that wasn’t true; I’m not complaining about that,” attorney Glenn Cohen said. “But why? Why are you going to embarrass Phil Mickelson when he’s there to support your tournament and the charities it supports and the (PGA) Tour?”

Cohen also said Mickelson had “no earthly reason whatsoever” to comment any further, though that remark did not prove prescient. The golfer continued discussion of it on social media Thursday, including replying to many supporters.

“The community here needs the support,” he wrote to one fan. “Please help here. I’ll have my foundation continue to look into the best ways to help here too.”

Mickelson opened the tournament Thursday with a 3-under 69.