Super Bowl winning head coach Pete Carroll had time to reflect on his days as a successful head coach of the USC Trojans in an interview with the Los Angeles Times over the weekend.

Carroll, who is coming off the best season of his NFL coaching career and a title with the Seattle Seahawks, indicated that he wouldn’t have left the Trojans following the 2009 season if he knew about impending penalties the NCAA was going to impose on the football program.

The truth was, an opportunity came up and it was one I couldn’t turn away from,” Carroll told the Times. “… The NCAA came back at the university … ‘Now we’re going to revisit after five years.’ I had no knowledge that was coming. We thought maybe it wasn’t coming because they didn’t have anything to get us with. It wasn’t five days, it wasn’t five weeks. It was five years. Had we known that that was imminent … I would never have been able to leave under those circumstances. 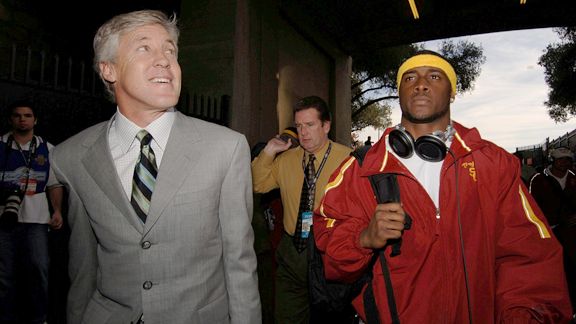 Everyone involved in the situation knew that the NCAA was going to lay some serious penalties against the USC football program following the Reggie Bush situation. If Carroll is claiming ignorance here, he’s obviously attempting to put a PR spin on a situation that has left many in Southern California upset at him for leaving under said circumstances.

Common logic suggests that Carroll cut and ran following the 2009 season in order to avoid having to coach a team that was likely going to be banned from postseason play. It’s not that skeptics blame him for leaving under that situation. After all, he received an offer to coach in the NFL, an offer that might not have come later if he had coached a sanctioned USC program.

At the time of Carroll’s exit, some did question whether he was attempting to flee a derailing train. Then freshman Conrad Wilton had this to say (via USA Today).

It’s a get-out-of-jail-free card…If I were Pete Carroll, I’d be on my way, too.

Far be it for anyone to question Carroll’s motives, but for him to firmly indicate that he had no idea what type of sanctions were coming is a tad ridiculous. Dark clouds were being cast over the USC athletic program during the time of his departure. There is absolutely no way he could have been so far out of the know not to see that the eventual sanctions were coming.

Cutting and running is one thing. Ignoring that’s what you did is a completely different thing. Maybe Carroll should just come clean. Then again, his time at USC doesn’t necessarily bring up memories of “coming clean.”