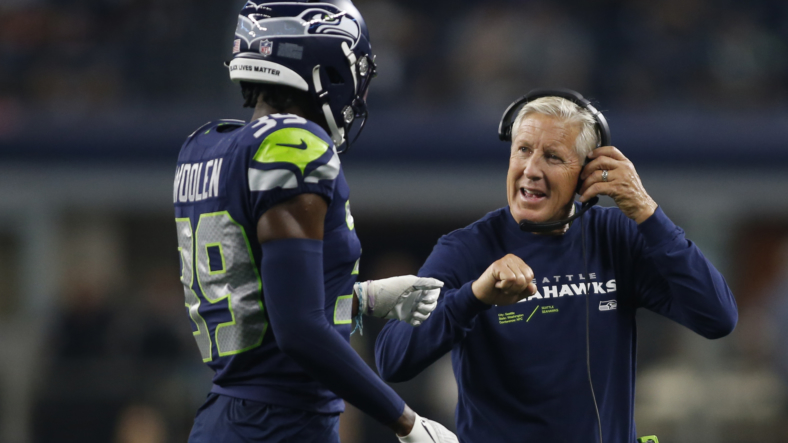 Seattle Seahawks head coach Pete Carroll is accustomed to winning, dating back to his scandal-filled days as the USC Trojans head coach. Since being hired by Seattle in 2010, Carroll has led the team to nine playoff appearances, two NFC Championships and a Super Bowl title.

Fresh off an ugly 7-10 season and with Russell Wilson now on the Denver Broncos, expectations have been muted heading into the 2022 campaign. Apparently, Carroll has not received that memo. In fact, he believes that this iteration of the Seahawks is capable of winning 10 games.

It’s one thing to show the players you have confidence in their ability to win. It’s a completely different thing to set unrealistic expectations entering a season of complete transition in the Pacific Northwest.

Related: Pete Carroll and the highest-paid NFL head coaches of 2022

Pete Carroll, Seattle Seahawks likely headed for the cellar in 2022

It must be noted that most of Carroll’s success came with Wilson tossing the rock around Seattle. In fact, he posted a 14-18 record with the Seahawks prior to Wilson’s arrival in 2012.

With Seattle set to take on its former star quarterback at home Monday night to open the 2022 NFL season, a lot of eyes are going to be on the Pacific Northwest. The Seahawks then follow that up with a road date against the reigning conference runner-up San Francisco 49ers.

In addition to taking on San Francisco twice this season, Seattle must compete with the defending champion Los Angeles Rams two times while taking on a superior Arizona Cardinals squads twice as well. This doesn’t even take into account matchups against 2021 NFL Playoff teams such as the Tampa Bay Buccaneers, Las Vegas Raiders and Kansas City Chiefs. They’ll be doing so with a journeyman in Geno Smith under center and a lackluster offensive line to protect the veteran.

It just doesn’t seem realistic to believe that the Seahawks can come away with double-digit wins given this slate. Despite that, Carroll’s confidence seems to be extending to the rest of the organization.

From a logical perspective, odds are not favoring Pete Carroll and the Seattle Seahawks right now. According to BetMGM, they have the third-worst odds in the NFL to win the Super Bowl, ahead of only the Houston Texans and Atlanta Falcons. Meanwhile, Vegas Insider has Seattle’s projected win total at 5.5.