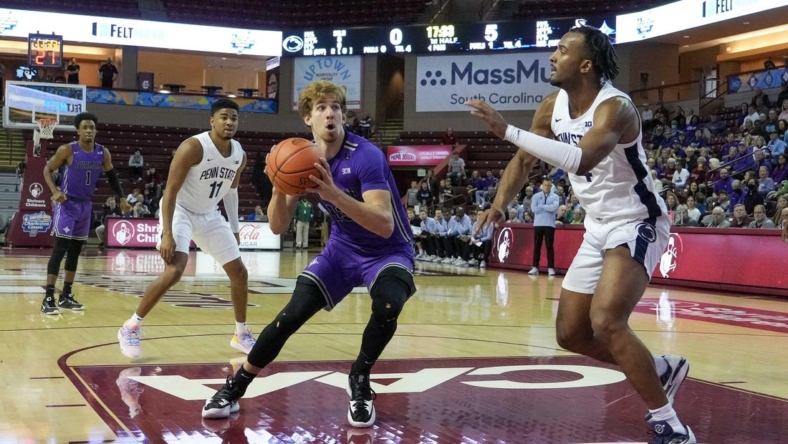 Jalen Pickett and Seth Lundy both scored 20 points and Penn State held on to beat fast-charging Furman 73-68 on Thursday in the first round of the Charleston Classic at Charleston, S.C.

A 19-point lead shrunk to one point before the Nittany Lions recovered.

Leading 69-68, Lundy scored on a jumper at the 1:22 mark. The only other points were Lundy’s two free throws with six seconds left.

Penn State (4-0) meets the Old Dominion-Virginia Tech winner in the semifinals Friday. Furman (2-1) will play the loser of that other game in the consolation bracket.

Mike Bothwell had another big game for Furman with 26 points. Tyrese Hughey chipped in 15 points off the bench and Jalen Slawson had 10.

The Paladins made a steady comeback, but they were dinged by untimely turnovers down the stretch.

Furman pulled within 63-57 on Ben VanderWal’s 3-point basket and then pulled close on Slawson’s basket to complete a 10-0 run. During that time, Penn State was in a scoring drought of more than five minutes before Andrew Funk’s 3-pointer.

Furman made 11 baskets from 3-point range and claimed 14 offensive rebounds to help offset 32.4 percent shooting from the field.

The Paladins also held a 40-32 rebounding edge over their Big Ten opponent. Hughey had a game-high 11 rebounds.

Penn State shot 54.8 percent from the field in the first half to hold a 46-29 lead at the break. Pickett had 13 points on 5-for-5 shooting from the field.

Penn State used a 10-2 spurt to take a 44-23 lead. Furman was hurt by a scoring drought of more than four minutes between baskets from Bothwell.

By game’s end, there were only a total of 16 attempted free throws for the teams combined. Penn State went 8-for-9.