Penguins and Bruins, heading in opposite directions, clash in Pittsburgh 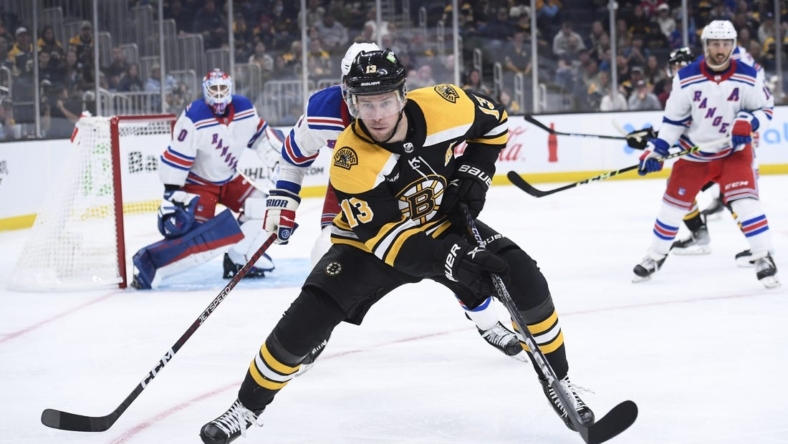 The visiting Boston Bruins and Pittsburgh Penguins come into their meeting Tuesday in opposite moods.

Coach Jim Montgomery gave the Bruins a full weekend off following back-to-back wins Thursday and Friday against the Detroit Red Wings and Columbus Blue Jackets, 5-1 and 4-0, respectively, with the latter coming on the road.

That left Boston with one loss in its first nine games, the best start through that many games in franchise history. In seven of the nine games, the Bruins never trailed.

“You’ve got to enjoy it a little bit,” Bruins forward Charlie Coyle said. “We (were given days) to rest and have a good Halloween weekend — and we deserve it right now.”

Veteran feisty winger Brad Marchand, who had surgery on both hips during the offseason, returned for Boston about a month earlier than originally expected when he played against Detroit and had two goals and an assist. He was held out against Columbus as a precaution but is expected to be available against Pittsburgh.

“It’s amazing how he comes up with pucks,” Montgomery said. “Like the puck’s in between two bodies and he’s like a little Tasmanian devil — he’s twirling all around and the puck just seems to follow him. It’s amazing. He tracks it. He fights for it. He’ll bite your leg off for it.”

However, Boston center David Krejci left Thursday’s game and missed Friday’s game because of an upper-body injury, and his status remains unclear. Top defenseman Charlie McAvoy has yet to play because of offseason shoulder surgery.

Given some of the injuries and questions, Montgomery is as flabbergasted as he is thrilled with the Bruins’ October showing.

Quips like that are hard to come by around Pittsburgh right now.

After starting 4-0-1 with six goals in each of those wins, the Penguins headed west and went 0-4 through Edmonton, Calgary, Vancouver and Seattle, netting just one goal in each of the final three games.

“Our guys are discouraged,” said coach Mike Sullivan, who tied Eddie Johnston on Saturday and on Tuesday will become the all-time franchise leader in Penguins games coached with 517.

Not that the last handful have been all that memorable for him or the players.

“As you know, they’re proud guys,” Sullivan said of his team. “They care about winning. And when you go through times like this, everybody feels it because they care. We all do.”

Pittsburgh defenseman Marcus Pettersson suggested the team has been playing a style a little too open and risky.

“I think it gets the opponent some chances,” Pettersson said. “We’ve got to dig in. We know we have it in this (locker) room.”

The Penguins certainly did in their first five games, but that might seem like long ago at this point after they were outscored 18-6 during the four-game losing skid.

Veteran Pittsburgh forward Jeff Carter left in the first period of Saturday’s 3-1 loss at Seattle because of a lower-body injury. His status remains unclear.