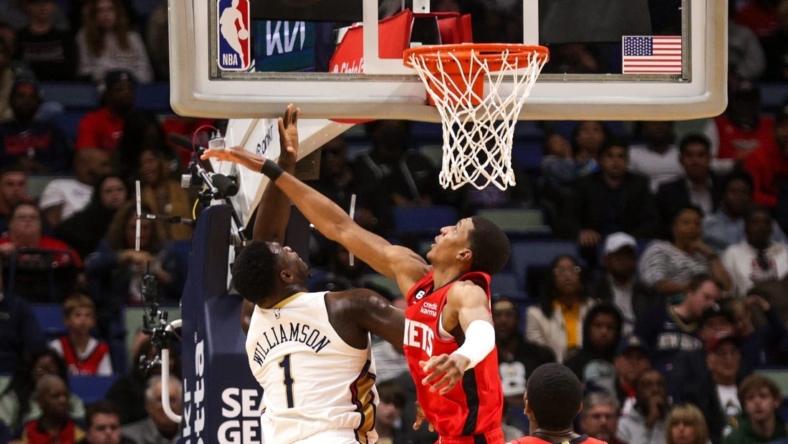 Zion Williamson scored 26 points and the host New Orleans Pelicans scored the final 13 points of the game to defeat the Houston Rockets 119-106 on Saturday night.

Larry Nance Jr. added 22 points, Brandon Ingram scored 20 and Jose Alvarado had 12 for the Pelicans, who scored a season-low 95 points two nights earlier in a loss to Portland.

Jalen Green scored 33 points, Kevin Porter Jr. added 23 and Eric Gordon 15 for the Rockets, who lost for the eighth time in nine games.

Alvarado and Porter were called for double technicals and ejected for an altercation in the final seconds.

Ingram broke a 106-all tie by making two free throws, and Alvarado and Ingram each made a 3-pointer to trigger the decisive run.

The Rockets scored the first five points of the third quarter to pull within eight points.

Williamson and Herbert Jones scored six points each as the Pelicans expanded the lead to 78-60.

Green scored 13 straight Houston points, including three 3-pointers, as the Rockets sprinted to an 87-86 lead at the end of the third quarter.

Houston started the fourth quarter with an 8-1 run before Alvarado’s 3-pointer produced the Pelicans’ first basket and trimmed the lead to 95-90.

Gordon answered with a three-point play, but Williamson’s driving basket gave New Orleans a 102-100 lead midway through the quarter.

Porter twice tied the score with baskets, but Houston didn’t score in the final 2:58.

The score was tied five times in the first six minutes before Nance broke the final tie by making a 3-pointer.

He added another 3-pointer and a layup and Devonte’ Graham did the same as the Pelicans built an 11-point lead.

Green finished the scoring with a 3-pointer that gave him 10 points in the period, which ended with New Orleans holding a 34-26 lead.

The Rockets scored the first four points of the second quarter, but six Pelicans scored four or more points each as the lead expanded to 18. Porter’s 3-pointer and a layup by Green left New Orleans with a 63-50 halftime lead.