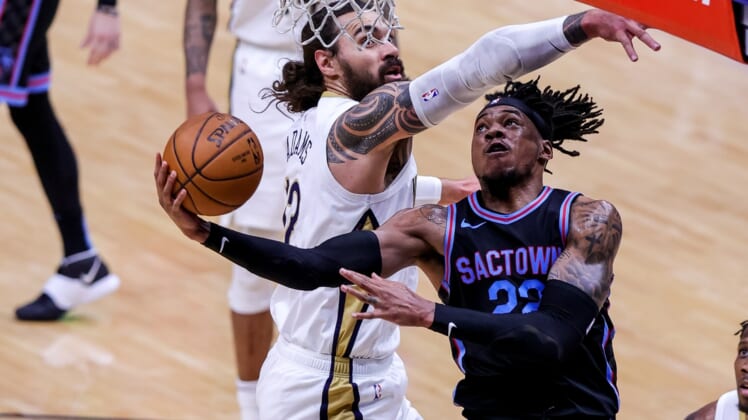 Eric Bledsoe added 13 points and Kira Lewis Jr. and Wes Iwundu had 11 each as the Pelicans won their third straight.

The Pelicans led by 23 at halftime and withstood repeated second-half charges by Sacramento, which was led by De’Aaron Fox’s 43 points. Harrison Barnes had 16 points and 11 rebounds, Maurice Harkless scored 15, and Tyrese Haliburton and Delon Wright scored 12 each for the Kings, who lost their seventh straight.

Fox scored 12 points as the Kings cut their halftime deficit to 74-62 midway through the third quarter.

Ingram responded with a 3-pointer and New Orleans took an 84-66 on Williamson’s layup. Sacramento scored the final five points to climb within 86-74 at the end of the quarter.

The Kings started the fourth quarter with a 10-5 run as Fox’s jumper cut the deficit to 91-84.

Ingram made two free throws and added a 3-pointer that gave New Orleans a 100-87 lead with just over six minutes remaining.

Sacramento got within four with 18.4 seconds left, but didn’t get closer.

Ingram scored 10 first-quarter points as the Pelicans led 31-19 at the end of the first quarter.

Sacramento didn’t make a field goal during the final 2:26 of the first quarter or the first 3:05 of the second quarter as New Orleans opened a 38-20 lead.

Ingram converted a three-point play and assisted on Jaxson Hayes’ dunk as the Pelicans took a 46-23 lead.

The lead grew to as much as 26 points before Fox beat the buzzer to make the Kings’ first 3-pointer on their 15th attempt, leaving New Orleans with a 68-45 halftime lead.